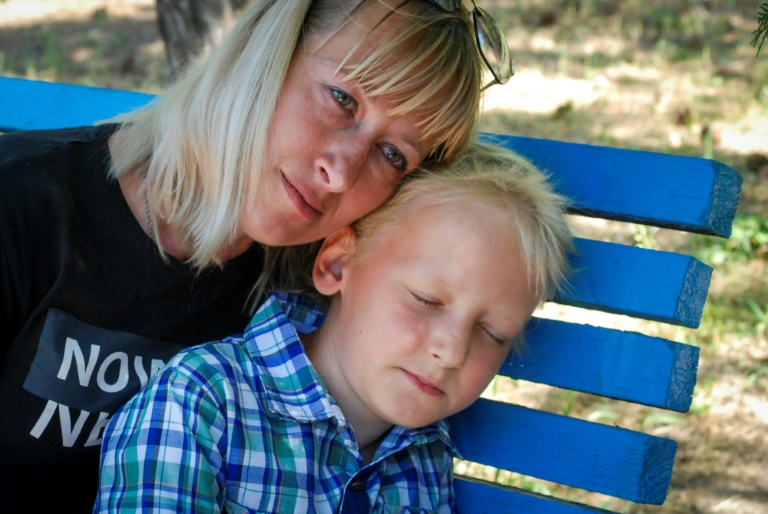 Spending weeks in a basement with his family, eight-year-old Yegor Kravtsov filled the pages of his small blue diary with an idyllic image of Greece on its cover – Copyright AFP Marina Moyseyenko

The horrors of the bloodiest chapter so far in the Ukraine conflict are poignantly captured in the words and drawings of an eight-year-old boy.

Spending weeks in a basement with his family, Yegor filled the pages of a small blue book with an idyllic image of Greece on its cover.

“I slept well, then I woke up, smiled and read 25 pages. Also, my grandfather died on April 26th,” Yegor says, reading from a page in his diary after escaping the now Russian-held city with his mother and sister.

The family have managed to flee to Zaporizhzhia — 100 kilometres (62 miles) across the frontline from devastated Mariupol.

A missile strike had caused the ceiling of their home to fall in on them — all three suffered injuries.

“I have a wound on my back, the skin is ripped off. My sister’s head is broken, my mum tore her hand muscles and has a hole in the leg,” Yegor reads from another entry.

On a sunny day in Zaporizhzhia, he plays badminton and rides his scooter — a world away from the images of destruction he scrawled in his diary with a blue pen.

There are armed men, tanks, a helicopter and exploding buildings. In one drawing, the ceiling of his house is shown collapsing following the missile strike on their home.

“The noise scared me,” reads one entry. In another, he describes how the family bandaged each other and went looking for water.

“I want to leave so badly,” he wrote.

His mother, Olena Kravtsova, a single mum, burst out crying when she first found the diary.

“I took it to my family to show them. Everybody was crying,” she tells AFP.

“Maybe he just needed to express himself so as not to keep all the emotions inside.”

His sister Veronika, 15, who has a deep scar on her head, said she hoped the diary “will be useful to someone in the future”.

Images of the diary were first posted online by Yegor’s great-uncle Yevgeniy Sosnovsky, a photographer who documented the battle for Mariupol before leaving the city last month.

The family used to live near the Azovstal steel works — the site of a last stand by Ukrainian soldiers who only surrendered at the end of May after three months of fighting.

Now they are being housed in a shelter for displaced people in Zaporizhzhia and intend to travel to the capital Kyiv within days.

Yegor’s mother says he is still in shock and reluctant to speak about his experiences.

Asked if he wanted to continue writing in future, Yegor just says: “Probably”.