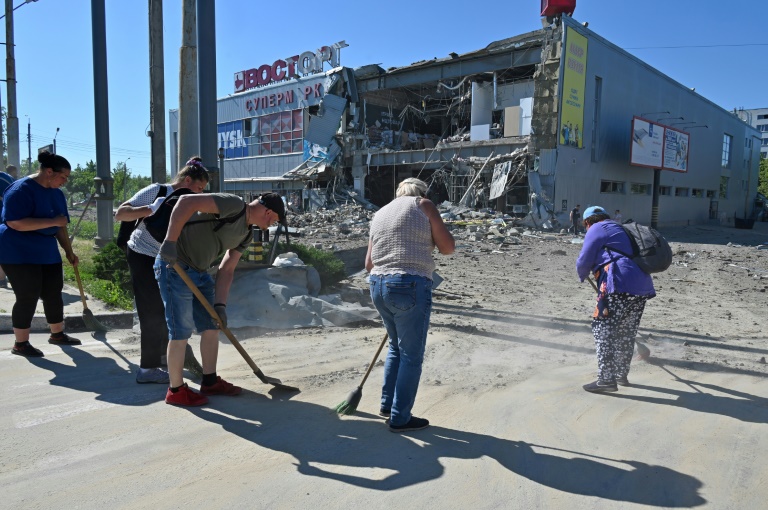 Communal workers clean up the rubble of a supermarket, partially destroyed by a missile attack on the southeastern outskirts of the Ukrainian city of Kharkiv – Copyright THAILAND’S OFFICE OF THE NARCOTICS CONTROL BOARD (ONCB)/AFP Handout

– Fate of Donbas at stake in Severodonetsk: Zelensky –

Ukrainian President Volodymyr Zelensky says the fate of the eastern industrial heartland of Donbas hinges on the fierce battle for the city of Severodonetsk, most of which has fallen to Russian forces.

In his evening address to the nation, Zelensky says the battle is “one of the most difficult” of the war.

“In many ways, the fate of our Donbas is being decided there.”

Russian forces have for weeks been concentrating their firepower on Severodonetsk and its sister city of Lysychansk across the river.

A defiant Lugansk governor Sergiy Gaiday declares that Ukrainian forces could reclaim Severodonetsk “in two to three days” if they receive long-range artillery promised by the US and Britain.

Hundreds of civilians are reportedly sheltering at a chemical plant in the city’s industrial zone, which was targeted in Russian strikes overnight.

UN chief Antonio Guterres says the war threatens to unleash “an unprecedented wave of hunger and destitution” as talks on unblocking Ukrainian and Russian farm exports trapped by the war remain deadlocked.

Guterres said that while this year’s food crisis is “about lack of access” to food, next year’s could be about “lack of food” itself and says 1.6 billion people risk being affected.

“There is only one way to stop this gathering storm: the Russian invasion of Ukraine must end,” he says in a speech.

The UN is trying to negotiate a deal that would allow Ukrainian grain shipments to resume from the country’s Black Sea ports — currently under a Russian blockade — in return for the lifting on sanctions on Russian food and fertilizer.

Zelensky calls for Russia to be expelled from the UN’s Food and Agriculture Organization, saying Moscow is to blame for global food food shortages.

“There can’t be any discussion on prolonging Russia’s membership in the FAO. What is there for Russia to do if they are causing hunger for at least 400 million, or potentially more than a billion people?” Zelensky says during a meeting of the OECD club of leading developed and emerging economies.

Russia’s defence ministry announces that 60 ships and 40 aircraft  will take part in the exercises “for the defence of sea lanes and fleet bases”, with further manoeuvres taking place on land in the Russian enclave of Kaliningrad.

If Sweden and Finland’s NATO applications — currently blocked by Turkey — are approved, Russia would become the only country on the Baltic Sea outside of the Western military alliance.

The UN refugee agency UNHCR says nearly five million Ukrainians have been registered as refugees across Europe since the Russian invasion.

“The Ukraine war has caused one of the largest human displacement crises in the world,” the agency says.

A further eight million people are displaced within Ukraine itself, according to the International Organization for Migration.