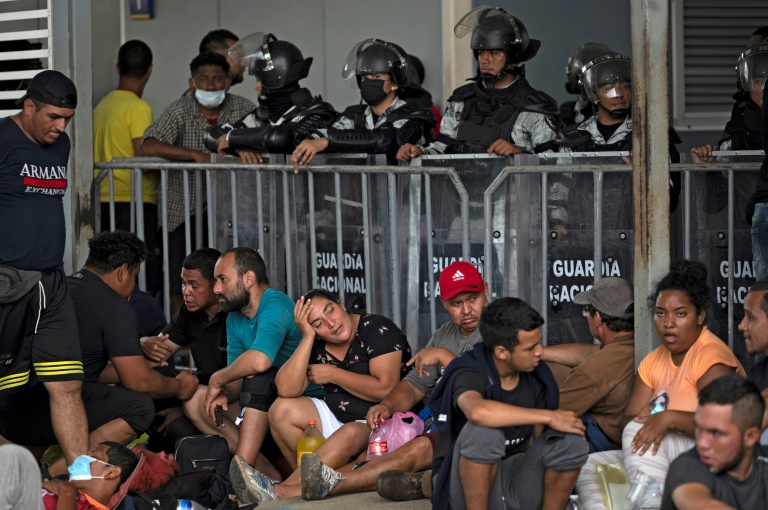 Migrants taking part in a caravan heading to the United States, wait for transit visas outside an immigration office in Huixtla, Mexico, on June 8, 2022 – Copyright AFP Rizwan TABASSUM

Thousands of mostly Venezuelan migrants began receiving temporary Mexican visas Wednesday as they prepared to continue their trek toward the United States.

The migrants had set up a temporary camp on a basketball court in the southern Mexican town of Huixtla, some 40 kilometers from where they began their journey on Monday close to the Guatemala border.

Immigration authorities in Huixtla began slowly processing temporary visas for the migrants Wednesday, which will allow them to stay in Mexico for 30 days without fear of being deported, said Luis Garcia Villagran, a coordinator with the Human Dignity Center NGO that is accompanying the caravan.

A Mexican government official confirmed to AFP that humanitarian visas were being issued to the migrants, but Garcia said the process was slow.

Huixtla has become a sort of bottleneck for undocumented migrants arriving from Central America, leaving the national immigration center there overwhelmed.

The caravan of people fleeing poverty, violence and political oppression in their homelands, set off on Monday in the same week that US President Joe Biden hosts the Summit of the Americas in Los Angeles, with migration one of the main agenda items.

On Tuesday, the US announced a new commitment to provide $1.9 billion of private funding to Central America with the aim of slowing the migration wave.

This most recent caravan is made up of around 11,000 people, including a group of 70 with handicaps, according to the human rights ombudsman’s office.

Venezuelan Julio Andrade, 43, who lost a leg in a traffic accident, told AFP he was migrating “for a better future, because the situation in my country is terrible. There is no employment, security or medicines.”

While waiting, the Venezuelans sang their national anthem and told jokes about President Nicolas Maduro.

They are hoping to receive special treatment from the United States, which does not recognize Maduro’s 2018 re-election as legitimate.

Another Venezuelan, 29-year-old Gleidys, said she could not understand why Mexican authorities were making it so difficult to receive a temporary visa.

“We don’t want to stay here … we’re passing through,” she said.

The UN says more than six million Venezuelans have left the country in recent years due to the economic and political crises there.

Migrant caravans that traversed Mexico in 2018 and 2019 sparked tensions with the administration of then-US president Donald Trump.

Since then, Mexico has stepped up its border controls and in 2021 more than 300,000 undocumented migrants were detained there.