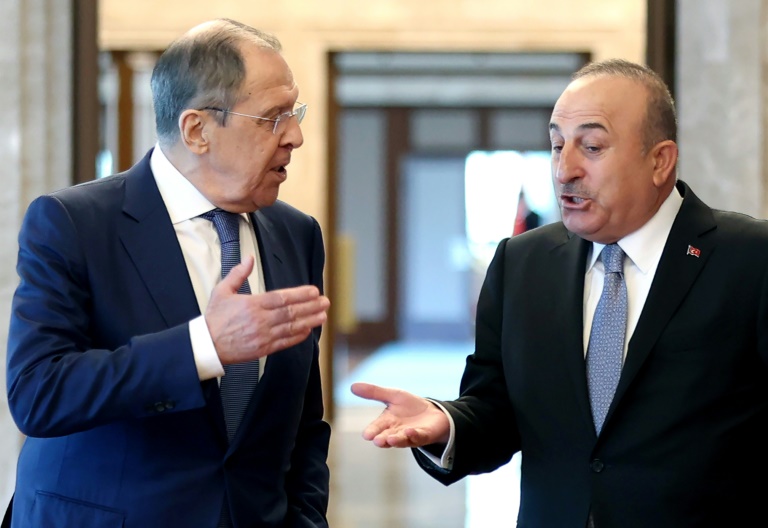 Russia and Turkey made little headway on Wednesday in talks aimed at securing safe passage for Ukrainian grain exports, as a Russian sea blockade triggered new warnings of deadly famine.

Prior to the war, Ukraine was a major exporter of wheat, corn and sunflower oil, but shipments have been blocked since Russia invaded its neighbour in late February, causing food prices to soar worldwide.

Countries in the Middle East and Africa depend on Ukraine’s exports, raising fears of hunger in those countries.

At the request of the United Nations, Turkey has offered its services to escort maritime convoys from Ukrainian ports, despite the presence of mines — some of which have been detected near the Turkish coast.

“We are ready to ensure the safety of ships that leave Ukrainian ports,” Russian Foreign Minister Sergei Lavrov said at a news conference with Turkish counterpart Mevlut Cavusoglu after talks in Ankara.

Ukraine, which was not part of the talks in Turkey, has said it is ready to create conditions to resume exports from its ports, but it seeks security guarantees not to be attacked by Russia.

But Russia’s chief diplomat blamed Ukraine for the situation.

“Grain can be freely transported to destinations, there are no obstacles from Russia,” Lavrov said.

Referring to Ukraine’s president, he said “it is necessary that Mr (Volodymyr) Zelensky give an order, if he is still in charge of something there, to allow foreign and Ukrainian ships to enter the Black Sea.”

Lavrov also said Russia was ready to provide guarantees it would not launch any attacks if Ukraine de-mined ports.

“We are ready to do this in cooperation with our Turkish colleagues.”

Cavusoglu said the UN plan was “reasonable” and “implementable”, and he offered to host a meeting in Istanbul to discuss the details of the scheme.

“We prepared a plan for food corridors,” a Turkish diplomatic source said.

“We presented it to Russia but as you see during the press conference, Russia sends the ball into the court of Ukraine,” added the source, who declined to be named.

Zelensky said this week that the amount of grain blocked by the war could triple within several months.

At separate talks on the global food crisis, Italian Foreign Minister Luigi Di Maio warned that millions of people could die of hunger unless Russia lifted its blockade.

“The next few weeks will be crucial to resolving the situation,” he said after a virtual meeting involving Turkey and Lebanon among other Mediterranean countries, alongside G7 president Germany and the UN’s Food and Agriculture Organization.

“I want to say clearly, we expect clear and concrete signals from Russia, because blocking grain exports means holding hostage and condemning to death millions of children, women and men.”

Turkey, which hosted talks between Russian and Ukrainian foreign ministers in March aimed at ending the war, has positioned itself as a neutral mediator as it maintains a delicate balancing act between its two Black Sea neighbours.

At the press conference, Cavusoglu said it was also important to export Russian goods as much as the Ukrainians, calling Moscow’s demands for an end to sanctions to help grain onto the world market “legitimate.”

“If we need to open up the international market to Ukrainian grain, we see the removal of obstacles standing in the way of Russia’s exports as a legitimate demand,” he said.

Soner Cagaptay, a specialist on Turkey for the Washington Institute think tank, said the UN-led plan that would allow Russia to trade with the outside world “could work.”

“Because ultimately this is about food security. Yes, people don’t want Russia to make money but at the same time nobody wants famine,” he told AFP.

Russia and Ukraine produce 30 percent of the global wheat supply.

Cagaptay said some progress could be made in the future, but it might require Turkish President Recep Tayyip Erdogan to meet Russian counterpart Vladimir Putin in the Russian southwestern city of Sochi, “where there’s nobody around to eavesdrop.”