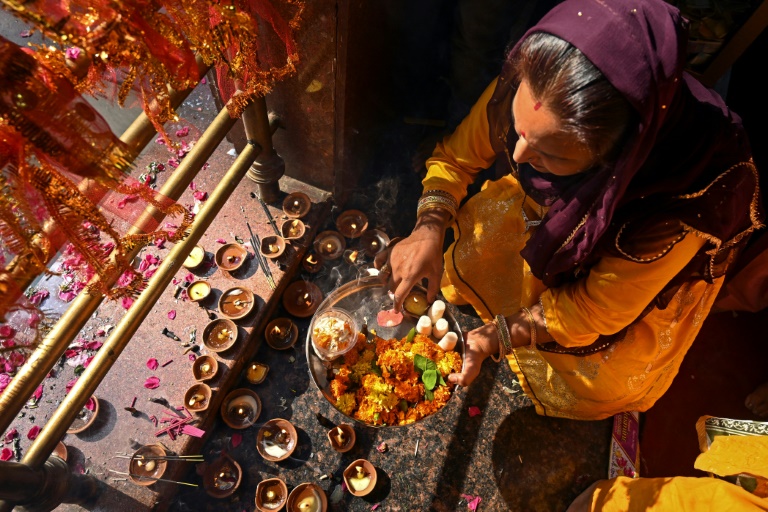 The spectre of recent violence in Indian-administered Kashmir overshadowed celebrations for a Hindu festival on Wednesday, with crowds a fraction of their usual size despite heavy security to mollify fears of an attack.

The annual gathering takes place at the Kheer Bhawani temple, a short drive from the city of Srinagar, and is usually a major religious milestone for the local Pandit community.

Worshippers and pilgrims typically offer milk and Kheer pudding to the sacred spring within the temple complex, throwing rose petals and lighting earthen oil lamps in rituals of respect for the Kheer Bhawani goddess.

But this year many stayed home, some fearful after the killing of nearly a dozen Hindus and Sikhs living in the Kashmir valley in recent weeks.

“I see much less crowd here compared to previous years,” said Kirti, who travelled for hours to reach the temple along with her family.

Their voyage to the shrine passed armed soldiers lining the road in, while hundreds of police and paramilitary troops were deployed at the site to scan visitors with metal detectors and X-ray machines.

“Obviously, some people are scared because of the recent targeted killings,” Kirti said.

“But I am happy we came again and see that it’s not that unsafe.”

Kashmir has weathered decades of violence and upheaval since it was partitioned between India and Pakistan when both countries became independent in 1947.

The two neighbours both claim it in full, and have fought two of their three wars over control of the territory.

Tension has run high since then, with many accusing India of “settler colonialism” aimed at changing the demographics in the highly militarised territory.

Through the decades, Kashmir’s minority Pandits have long fretted over their place in the restive territory and their relationship with its Muslim majority, which largely supports the territory’s independence or a merger with Pakistan.

Hundreds of thousands of them fled Kashmir from 1989 in the wake of an armed rebellion against Indian rule.

The spate of killings since the last week of May have heightened the community’s fears for its safety.

Among the victims was Rahul Bhat, a Pandit who had been employed by the government, alongside 10,000 others, to help resettle members of the community that fled back in the valley.

He was shot dead inside his office by militants, sparking large protests by colleagues who have refused to return to work and demanded reassignment to “secure” locations outside the Kashmir valley.

– ‘Boycotted because of fear’ –

Only around 2,000 people made the pilgrimage to the Kheer Bhawani shrine on Wednesday, officials told AFP — a fraction of the huge crowds seen in earlier years.

Sandeep Raina, a community representative, told AFP that most people living in Pandit resettlement projects had stayed away in protest.

“Most boycotted because of fear and the government not meeting our demands,” he said.

Those who did come for the festival nonetheless appeared in high spirits.

Each year, most of the festivals stalls are manned by local Muslims, selling toys and worship materials to Hindu pilgrims.

Ghulam Hassan was one of several vendors offering free flowers to worshippers.

“I have been doing it for six years,” he told AFP. “It’s about maintaining brotherhood and doing it brings me comfort.”