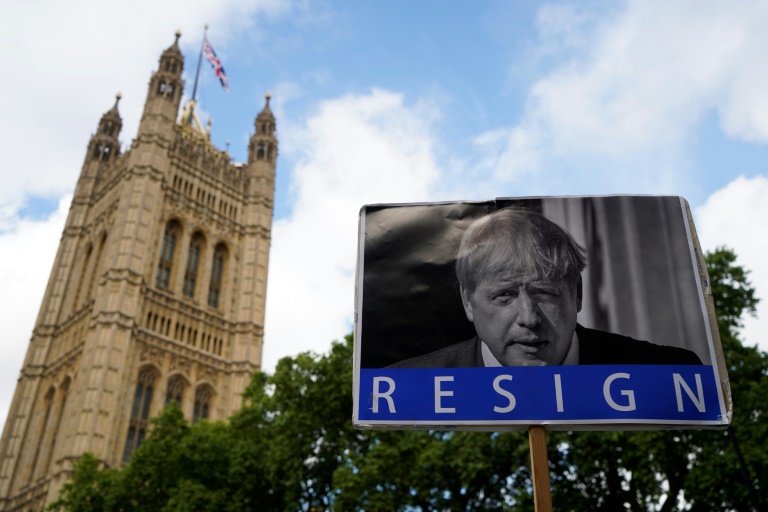 Prime Minister Boris Johnson says it is time to ‘move on’, but many question whether he can recover voters’ trust – Copyright AFP Ludovic MARIN

British Prime Minister Boris Johnson faces a boisterous parliament Wednesday in his first appearance before lawmakers since narrowly fending off a damaging no-confidence vote from his own Conservative MPs.

His backers are likely to stage a noisy show of support when he steps up for his weekly Prime Minister’s Questions.

Critics, however, have warned the political crisis is not over for the embattled prime minister after more than 40 percent of his own MPs voted against him in Monday’s no-confidence vote.

Johnson, who called the 211-148 vote a “convincing result”, has vowed to plough on, saying it was time to “draw a line” under questions about his leadership and the “Partygate” controversy over lockdown-breaking events at Downing Street.

The prime minister’s team has tried to regain the offensive by pointing to a setpiece speech expected in the coming days on new economic support measures, as Britons struggle with a cost-of-living crisis.

But many question whether Johnson can recover voters’ trust, as the party braces for two Westminster by-elections this month and an upcoming investigation by MPs into whether he lied to parliament over “Partygate”.

Even without any obvious candidate to succeed him, former Tory party leader William Hague this week argued that Johnson should now “look for an honourable exit”.

Comparing Monday’s margin to votes that ultimately toppled Johnson predecessors Margaret Thatcher and Theresa May, Hague said it showed “a greater level of rejection than any Tory leader has ever endured and survived”.

“Deep inside, he should recognise that, and turn his mind to getting out in a way that spares party and country such agonies and uncertainties,” Hague wrote in The Times.

The Guardian reported Wednesday that rebel Conservative MPs were drawing up plans for “vote strikes” to paralyse the government’s legislative agenda, as happened at the end of May’s stint in office.

The i newspaper also said the prime minister now faces a “war of attrition”, with the rebels pushing to remove him despite his narrow victory in the no-confidence vote.

Johnson, 57, needed the backing of 180 of the 359 Conservatives MPs to survive the vote.

Most of Johnson’s cabinet publicly backed him in the secret ballot. But more than 40 percent of the parliamentary party did not.

“I think there’s very little doubt that the vulnerability of the prime minister is going to be the single greatest factor shaping what this government does for the foreseeable future,” Menon told AFP.

Under current Tory rules, the prime minister cannot be challenged again for a year, which leaves little time for any new leader to emerge before the next general election due by 2024.

But the party’s “1922 committee” of MPs, tasked with overseeing leadership challenges, says it could easily change the rules if a majority backs it.

The Liberal Democrats are now pushing for a parliamentary no-confidence vote after Johnson survived the Tory revolt.

“Liberal Democrats are tabling a motion of no confidence in the prime minister so Parliament can finally put an end to this sorry mess,” party leader Ed Davey said.

“Every Conservative MP with a shred of decency must back our motion and give Boris Johnson the sack.”

If the government lost a no-confidence motion in the House of Commons it would have to call a snap general election.

That appears unlikely at present given the Conservative majority, but Johnson could face a challenging period in the months ahead.

“I think we’re talking a matter of months, up to party conference (in October),” he told Sky News.