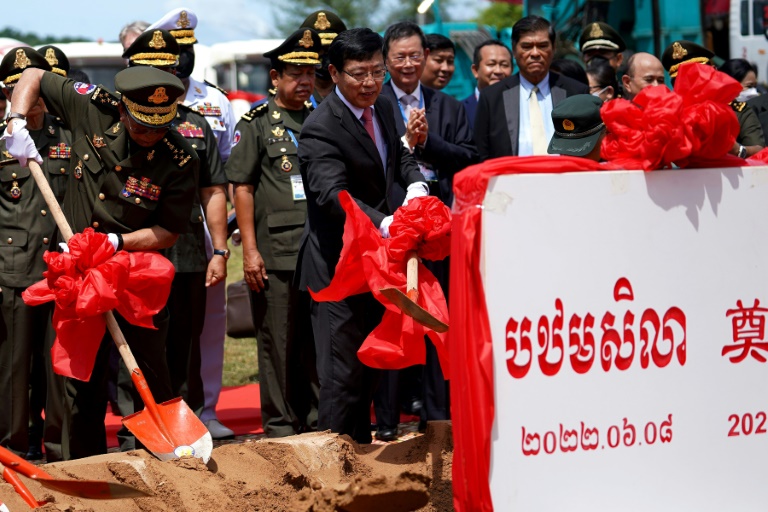 Cambodia and China on Wednesday broke ground on a Beijing-funded project to revamp a naval base that the US fears is intended for Chinese military use.

The Washington Post this week cited unnamed Western officials as saying the new facilities at Cambodia’s Ream base — strategically located on the Gulf of Thailand — were being built for the “exclusive” use of the Chinese navy.

Both countries deny the allegation, with Phnom Penh saying the base’s development is “not a secret”.

Heavy construction machinery was visible at the site.

“It is not targeted at any third party, and will be conducive to even closer practical cooperation between the two militaries, better fulfillment of international obligations and provision of international public goods,” Wang said.

The project, paid for with a Chinese grant, also includes upgrading and expanding a hospital as well as donations of military equipment and repair of eight Cambodian warships, Tea Banh said.

“There are allegations that the modernised Ream base will be used by the Chinese military exclusively. No, it is not like that at all,” the minister told several hundred people including foreign diplomats at the ceremony.

“Don’t worry too much, the Ream base is very small… It won’t pose a threat to anyone, anywhere.”

The revamp will be finished in two years, another Cambodian official said.

Wang said it would deepen the iron-clad friendship between the two countries and help modernise the Cambodian navy.

The base has been a sore spot in US-Cambodia relations for years, with Washington suspecting it is being converted for use by China as Beijing seeks to buttress its international influence with a network of military outposts.

American embassy spokeswoman Stephanie Arzate said the United States and other countries in the region had “expressed concern about the lack of transparency on the intent, nature, and scope of this project”, as well as China’s role in its construction.

Concerns about the base go back as far as 2019, when the Wall Street Journal reported on a secret draft deal allowing Beijing to dock warships there.

Cambodia has since dismantled facilities at the base that were built partly with American money and played host to US military exercises.