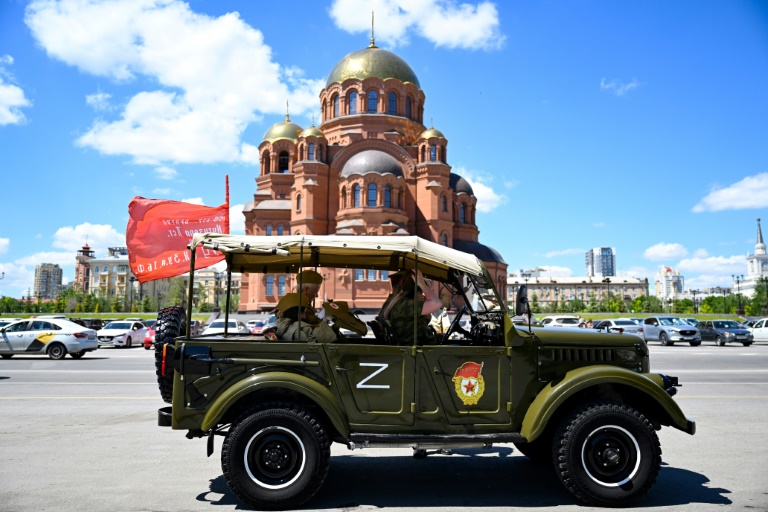 Tourists wearing WWII-era styled outfit take a tour of the southern Russian city of Volgograd in a historical military vehicle adorned with the letter Z, a symbol of support for Russia’s offensive in Ukraine – Copyright AFP TANG CHHIN Sothy

Fighting continues for Severodonetsk, a key city in Ukraine’s east, which is the focus of a major Russian offensive.

Ukrainian President Volodymyr Zelensky says government forces are “holding out” against the invaders, but “there are more of them and they are stronger”.

US Secretary of State Antony Blinken says reports that Russia has stolen grain from Ukraine for export are “credible”, echoing allegations made by Ukrainian authorities.

The New York Times reported Monday that a number of freight vessels had set sail from Russian-controlled Ukrainian ports with what US officials have described as “stolen Ukrainian grain”.

The paper said the shipments were bound mainly for Africa, where global grain shortages caused by the war are worsening food insecurity.

Ukraine says it opposes any visit by Rafael Grossi, head of the UN’s nuclear watchdog to its nuclear plant at Zaporizhzhia while it is under Russian occupation.

“The visit to the plant will only become possible when Ukraine takes back control of the site,” Energoatom, Ukraine’s nuclear agency, writes on Telegram.

International Atomic Energy Agency (IAEA) chief Grossi has been arguing the need for an inspection to ensure the plant’s safety.

– US orders seizure of Abramovich jets –

The US Justice Department orders the seizure of two aircraft owned by Russian oligarch Roman Abramovich, saying they were used in violation of sanctions on Russia imposed over its invasion of Ukraine.

The US says the Boeing 787-8 Dreamliner and Gulfstream G650ER executive jet were flown into Russian territory earlier this year in violation of US export controls.

It is unclear, however, whether the US can gain access to former Chelsea Football Club owner Abramovich’s aircraft, with one believed to be in Russia and the other possibly in Dubai.

– Russian superyacht handed to US –

A Fiji court hands over a superyacht linked by the US to a sanctioned Russian oligarch.

The $300-million Amadea, linked by the US to billionaire politician Suleiman Kerimov was impounded in Fiji in April at Washington’s request.

On Tuesday, Fiji’s Supreme Court dismissed a case taken by the boat’s registered owners against its seizure, meaning the yacht, which comes with a helipad, pool, jacuzzi and “winter garden”, can now leave Fiji for the US.

Pro-Kremlin separatists in Ukraine confirm the death of another Russian general in the war in Ukraine.

Separatist leader Denis Pushilin sends his “sincere condolences to the family and friends” of Major General Roman Kutuzov “who showed by example how to serve the fatherland”.

His death has not been confirmed by officials in Moscow.

Since Moscow sent troops into Ukraine on February 24, Ukraine’s forces claimed to have killed around a dozen generals but Russian media have confirmed only a few deaths among the top brass.