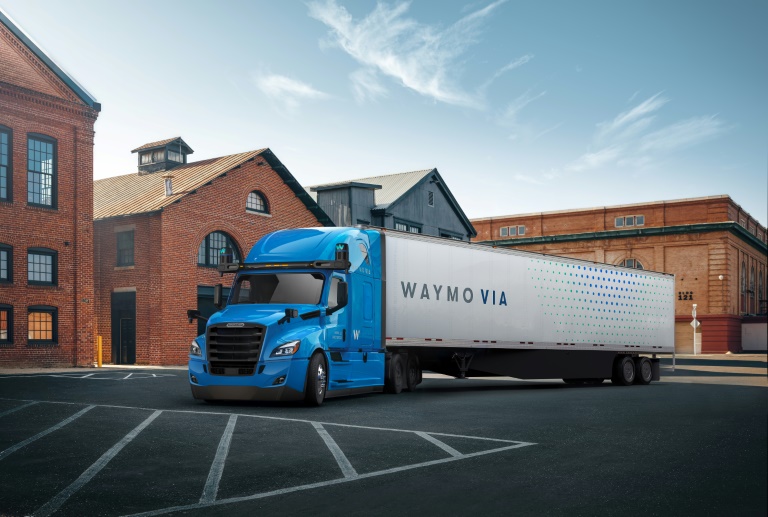 A vision for the future of logistics includes self-driving trucks like this one pictured by Alphabet-owned Waymo handling the long-hauls then ceding cargo to humans for the local legs to destinations. – Copyright AFP/File ANGELA WEISS

Uber and Google’s autonomous vehicle unit Waymo on Tuesday said they are joining forces to get driverless trucks hauling cargo on roads across the United States.

Due to the vast distances between American cities and with truck transport key to the economy, companies see self-driving as a way to cut costs and reduce risk.

Waymo will allow its technology to mesh with an Uber Freight platform that connects truckers with loads in a spin on how Uber lets people summon rides using smartphone apps.

“Uber Freight’s network of shippers, carriers, and marketplace technology is a great match for the Waymo Driver,” Waymo head of commercialization for trucking Charlie Jatt said in a statement.

Carriers that buy trucks equipped with Waymo systems will be able to opt in to having the vehicles deployed as “autonomous assets” on the Uber Freight network, the companies said.

The firms will also explore together the potential for creating hubs where cargo is easily handed off from self-driving trucks to human truckers.

“Both companies envision a future where autonomous trucks tackle the long-haul portion of driving, easing some of the burden of the increasing demand for freight while also enabling drivers to shift into short-haul jobs,” they said in the release.

Before driverless trucks are allowed onto roads and highways, however, multiple tests must still be conducted to ensure they are safe.

Waymo has been testing self-driving trucks in a handful of US states.

The Freight unit has been steadily growing, according to quarterly earnings releases.