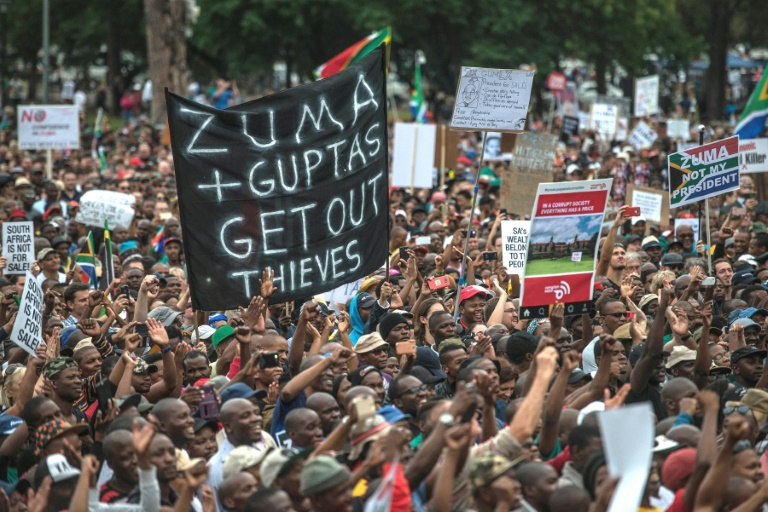 Two Indian-born businessmen brothers have been arrested in Dubai and are facing extradition to South Africa, where they were allegedly at the centre of a web of state corruption, police said Tuesday.

Atul and Rajesh Gupta are accused of paying bribes for state contracts and influence over ministerial appointments in a scandal that dogged former South African president Jacob Zuma’s administration.

“Dubai Police made the arrest after receiving a red notice for the Gupta brothers by Interpol,” Dubai Police said in a statement.

“The force has also coordinated with the authorities in South Africa regarding the extradition file to complete the legal procedures.”

The arrests came as a probe was concluded into massive plundering of state institutions during Zuma’s nine-year administration until 2018.

Their arrests came almost a year after Interpol issued a red notice, in July last year.

Red notices are a global alert enabling law enforcement to arrest a person sought for prosecution or to serve a custodial sentence and hold them pending extradition.

The Guptas came to South Africa in 1993 to build a sprawling business empire in mining, computer technology and media.

They had been granted South African citizenship but fled the country shortly after a judicial commission probing corruption started in 2018.

After four years of investigations, Chief Justice Raymond Zondo compiled a report revealing how the brothers became intertwined with the highest levels of government and the ruling African National Congress (ANC).

In a series of reports being published this year, the investigators said procurement contracts for rail, ports and pipelines amounted to “planned offences of racketeering activity conducted by a racketeering enterprise” linked to the Guptas.

Zuma “would do anything that the Guptas wanted him to do for them,” they added.

The corruption scandals engulfing Zuma led to his downfall. He was forced to resign in 2018.

Zuma was last year jailed for 15 months for refusing to testify before the investigators. He was released on parole, having served just two months of the term.

In July last year, Interpol said the Gupta brothers were being sought for fraud and money laundering in connection with a 25-million rand ($1.6-million, 1.5-million-euro) contract paid to a Gupta-linked company, Nulane Investment, to conduct an agricultural feasibility study.

Paul Holden, an investigator who runs an NGO alongside a former ANC MP, estimated that the cost of the Guptas’ alleged illicit activities in South Africa could be as much as 50 billion rand ($3.2 billion, three billion euros).