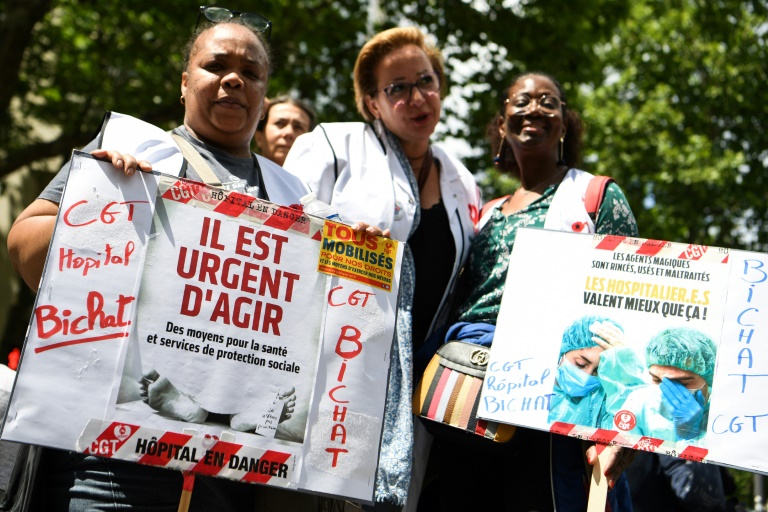 Health workers demonstrated in cities across France on Tuesday to demand higher pay and more staff for services stretched to breaking point, just days before the country votes in parliamentary elections.

Although recently re-elected President Emmanuel Macron has ordered a probe into which emergency units need immediate help with people in the sector warning there is no time to lose.

“Not a single department is spared, our public hospitals are in the process of dying for lack of resources,” said Pierre Wach, head of the CGT union in eastern city Strasbourg.

Protests began at hospitals in the morning Tuesday and continued at the health ministry in Paris in the afternoon, where staff, some wearing white medical coats, brandished placards with messages such as “Hire more and pay us more, it’s urgent!”.

Casualty workers’ group Samu-Urgences de France found in a May survey that at least 120 accident and emergency departments nationwide had already cut back on work or were preparing to do so after years of Covid-19 strain.

But opposition politicians and unions have accused him of playing for time until after the legislative elections on June 12 and 19 — as some polls show the president’s absolute majority could be at risk.

“It’s past time for inquiries,” Laurent Berger, head of the powerful CFDT trade union confederation, wrote in left-wing daily Liberation, calling for “urgent talks on how staff are organised” as hospitals were “almost knocked out”.

Braun said last week he would not craft “yet another report” but “write the prescription” for hospitals in need.

Among measures he has already suggested to newly-installed Health Minister Brigitte Bourguignon are better pay for night and weekend work or — more controversially — a system for filtering calls to the emergency services to identify the most severe.

“We have to switch to crisis management mode to get through the summer,” Thomas Mesnier, an MP loyal to Macron who is also an emergency doctor, wrote in the JDD weekly.

Some emergency workers have warned that a summer heatwave, which in past years has proved deadly for elderly people, or a new flare-up of Covid could push hospitals into chaos.