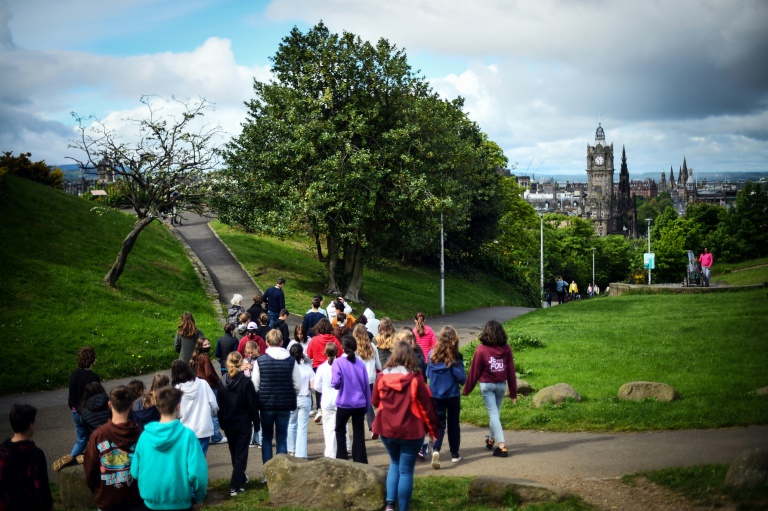 At the top of Calton Hill overlooking Edinburgh and the North Sea, a visiting English language student from France is in no doubt about the view: “Amazing!” he exclaims.

Covid has meant that the number of foreign students on such visits to the UK has fallen sharply.

But Britain’s departure from the European Union is not helping the recovery, as post-Brexit administrative requirements have raised travel costs.

About 50 college students from France’s Alsace region have taken advantage of the lifting of UK Covid restrictions. Others, however, have opted to learn English in EU nations such as Ireland or Malta — or simply sign up for language courses at home.

Teacher Sarah Lepioufle, accompanying her college’s Edinburgh trip, said the changes introduced since Brexit — the extra paperwork involved — had made applying for courses an “obstacle course”.

Non-EU students living in France are suddenly facing visa costs of £100 (118 euros, $126), whereas before Brexit they could travel on a collective travel document.

“I had to give up because I am Russian,” said Elisabeth Shpak, left out of the Scotland trip because of the fees involved.

The British Educational Travel Association, whose members help organise such visits, estimates that Brexit could cost the sector up to £3 billion annually.

Having spoken to stakeholders in the sector, they felt voyages would be 60 to 70 percent down compared to before Brexit and the pandemic, said Steve Lowy at BETA.

Before Britain’s EU exit, Britain welcomed “well over one million” such students per year, he said.

Now “there is a perception of us not being welcoming, and not open to people from Europe. And that is a harder thing to overcome”.

For those students who have managed to travel to Scotland, the experience is celebrated, especially coming out of Covid restrictions.

“There have been no trips, everything has been cancelled because of lockdowns,” said 13-year-old Aaron Schaetzel.

The UK authorities say they can already offer students a so-called “collective passport”.

But this document — the product of a 1961 European treaty — has not been signed by all current EU members.

As for the French travel sector, it is waiting on its own government’s guidance regarding use of the collective passport for the first time.

“These students and their teachers are here for cultural and educational purposes, and that is only good for the UK — not just the initial revenue they bring but for the long-term impact.”

But Brexit seems to have spoiled the opportunity for some EU-based students to visit the UK.

The previous week, a group visiting from Germany had been forced to leave behind four students who had not obtained their visas in time.