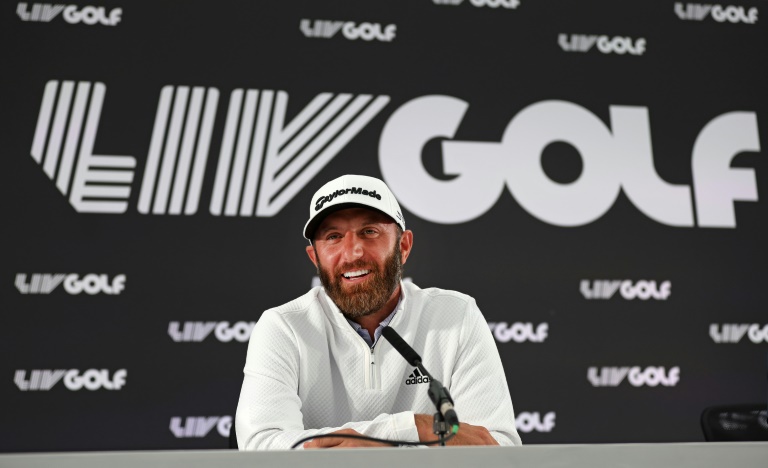 Dustin Johnson speaks to the press at the Centurion Club, near London – Copyright AFP Peter PARKS

Former world number one Dustin Johnson confirmed on Tuesday he has resigned his membership of the US PGA Tour to play in the Saudi-funded breakaway LIV Golf Invitational Series.

The decision effectively rules the American two-time major winner out of participating in the Ryder Cup, which pits the United States against Europe every two years.

Johnson was speaking at a press conference at Centurion Club, near London, ahead of the inaugural event in the series, which starts on Thursday.

The world number 15 had said in February he was committed to playing on the PGA Tour, which has refused releases for members to play in LIV Golf’s opener, which clashes with the Canadian Open.

But Johnson has now quit, following a similar decision by veteran US golfer Kevin Na, who is also in the field for the event in St Albans.

The 37-year-old, who has won more than $74 million on the PGA Tour, said: “Right now, I’ve resigned my membership from the Tour.”

Johnson, who is reportedly receiving $150 million in appearance fees to play in the new series, said it was difficult to predict the consequences of his decision.

“The Ryder Cup is unbelievable and it’s something that has definitely meant a lot to me,” added Johnson, who won all five of his matches in the United States’ record 19-9 win over Europe at Whistling Straits last year.

“I’m proud to say that I’ve played and represented my country and hopefully I will get a chance to do that again, but I don’t make the rules.”

The former Masters and US Open champion can still play in the four majors, which are not run by the PGA Tour, due to his record.

It has also been reported that Spain’s Sergio Garcia and South Africans Louis Oosthuizen, Charl Schwartzel and Branden Grace, who are also in the 48-man field for the LIV event, have all resigned their membership of the PGA Tour.

Six-time major winner Phil Mickelson confirmed on Monday he had also signed up to play in the inaugural LIV event in a major coup for the organisers.

Mickelson has not played since the publication of comments in February, when he criticised the PGA Tour and LIV Golf’s Saudi backers.

Players opting into LIV Golf have done so despite PGA Tour warnings of disciplinary action but the DP World Tour has been more opaque, saying it was “evaluating each request on a case-by-case basis”.

Players will compete as individuals and teams for eye-watering purses of $25 million in all seven regular-season events, played over 54 holes with no cut.

The eighth and final event will be a team championship, with a total prize fund of $50 million.

Amnesty International has said the series is an example of Saudi Arabia attempting to “sportswash” its human rights record.

The golfers were questioned on the human rights issue on Tuesday, including the 2018 murder of journalist Jamal Khashoggi.

A US intelligence assessment found that the Gulf kingdom’s de facto ruler, Crown Prince Mohammed bin Salman, “approved” an operation to capture or kill Khashoggi, a columnist who was critical of Saudi’s rulers.

Saudi officials deny this and say that his killing in the kingdom’s Istanbul consulate — which sparked worldwide outrage — was a “rogue” operation.

“The Khashoggi situation, we all agree that was reprehensible,” 2010 US Open champion Graeme McDowell told reporters on Tuesday.

“No-one’s going to argue that fact but we’re golfers… We are not politicians. I know you guys hate that expression, but we are really not, unfortunately. We are professional golfers.

“If Saudi Arabia wanted to use the game of golf as a way for them to get to where they want to be and they have the resources to accelerate that experience, I think we are proud to help them on that journey using the game of golf.”