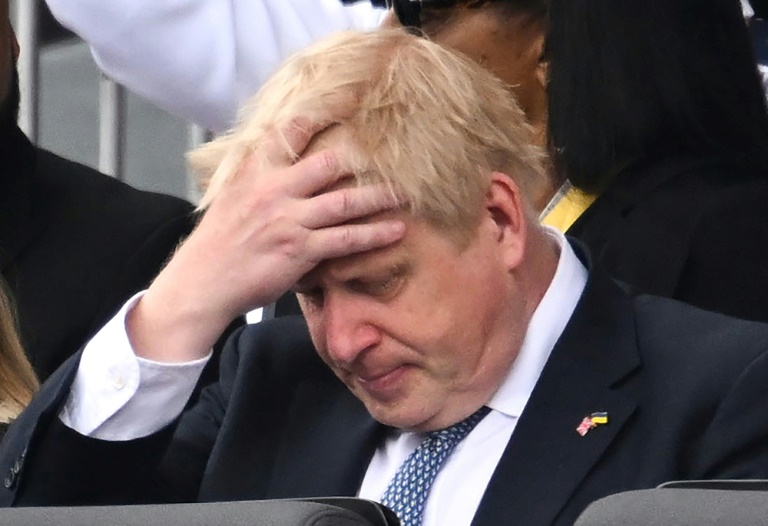 British Prime Minister Boris Johnson faced a no-confidence vote Monday among his Conservative MPs after dozens rebelled over a string of scandals that have left the party’s public standing in tatters.

The beleaguered leader has spent months battling to maintain his grip on power after the “Partygate” controversy saw him become the first serving UK prime minister found to have broken the law.

If he loses the evening vote, he must step down as Conservative party leader and prime minister. The result is expected after 1900 GMT.

Writing to his MPs, Johnson defended his governing record, including on delivering Brexit, fighting the Covid pandemic and supporting Ukraine.

“Tonight we have the chance to end weeks of media speculation and take this country forward, immediately, as one united party,” he wrote ahead of meeting his backbenchers in person before the vote.

But the scale of Tory disunity was exposed in a scathing resignation letter from Johnson’s “anti-corruption champion” John Penrose, and another letter of protest from longtime ally Jesse Norman.

The prime minister’s rebuttals over “Partygate” were “grotesque”, Norman wrote. He warned that the Tories risked losing the next general election, due by 2024.

Ex-cabinet member Jeremy Hunt, who lost to Johnson in the last leadership contest in 2019 and is expected to run again if he is deposed, confirmed he would vote against him.

“Conservative MPs know in our hearts we are not giving the British people the leadership they deserve,” Hunt tweeted.

After a dismal showing in May local elections, the party is predicted to lose two Westminster by-elections this month, including one in a previously rock-solid Conservative seat.

That is focussing the minds of Tory lawmakers, who fear their own seats could be at risk under Johnson.

Ahead of Monday’s vote, a snap poll by Opinium showed 59 percent of voters believe the Tories should ditch him as leader. Among Conservatives, the figure was a sizeable 34 percent.

Johnson was booed Friday by sections of an ardently patriotic crowd gathered outside St Paul’s Cathedral, ahead of a religious service for Queen Elizabeth II’s Platinum Jubilee.

For wavering Tories, the barracking at a televised national occasion reportedly marked a turning point. Some said they had held back on public criticism of Johnson until after the jubilee.

But cabinet ally Jacob Rees-Mogg dismissed the booing as “muted noise” and insisted that Johnson could survive with the slenderest of majorities.

The vote itself was the “routine of politics”, he told Sky News, dismissing the threshold reached for triggering the ballot as “a relatively low bar and fairly easy to get to”.

Graham Brady, who heads the backbench committee of Conservatives which oversees party challenges, had earlier confirmed that the threshold of 54 Tory lawmakers seeking a confidence vote — or 15 percent of its MPs — had been met.

At the start of a fast-moving day, Brady said the ballot would be held between 1700 and 1900 GMT Monday, with votes counted immediately and an announcement to follow.

He told reporters Johnson was informed Sunday night — as four days of jubilee celebrations ended — that the vote had been triggered.

Brady did not disclose how many no-confidence letters he had received from Conservative MPs, noting some colleagues had post-dated them until after the royal festivities.

In a message of thanks for the celebrations of her record-breaking 70-year reign, the queen had expressed hope that “this renewed sense of togetherness will be felt for many years to come”.

Conservative MPs had other ideas, as they openly criticised one another on Twitter over whether to support Johnson following the announcement of the vote.

Dozens have broken ranks and criticised him after a scathing internal probe into “Partygate” said he had presided over a culture of Covid lockdown-breaking parties in Downing Street.

Some ran late into the night, and one featured a drunken fight among staff, at a time when the government’s pandemic rules forbade ordinary Britons from bidding farewell in person to dying loved ones.

But Johnson, 57, who won a landslide election victory in December 2019 on a vow to “Get Brexit Done”, has steadfastly refused to resign.

He needs the backing of 180 MPs to survive Monday’s vote: a majority of one out of the 359 sitting Conservatives.

In previous leadership ballots, Tory predecessors Margaret Thatcher and Theresa May both ultimately resigned despite narrowly winning their own votes, deciding that their premierships were terminally damaged.

“If he wins narrowly, history suggests it would still be the beginning of the end for him,” politics expert Hannah Bunting at the University of Exeter commented.