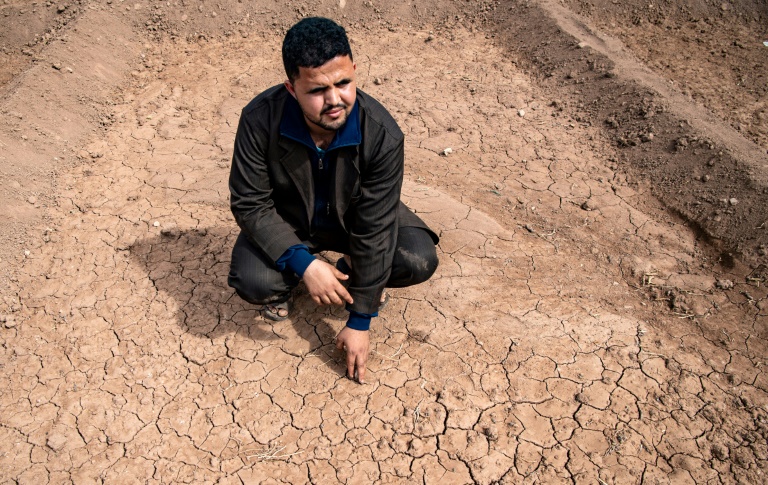 Wahid Aguertite, a farmer, touches the earth cracked by drought in October 2020, at an orange orchard on Morocco’s southern plains of Agadir – Copyright AFP LUDOVIC MARIN

As Digital Journal has reported, the United Nations has indicated that the time has come to increase the tapping of Earth’s diverse water resources in order to address shortages of fresh water in many parts of the world.

This includes identifying millions of cubic kilometres of water in deep land-based and seabed aquifers, in fog and icebergs, in the ballast holds of thousands of ships, and elsewhere.

The policy is set out in a new publication, titled ‘Unconventional Water Resources’. The publication makes clear that 1 in 4 people on Earth face shortages of water for drinking, sanitation, agriculture and economic development.

According to UNU-INWEH Director Vladimir Smakhtin: “As climate change worsens and with population rising worldwide, water shortages are a top threat to human development and security, making this authoritative analysis of unconventional water resources both timely and important.”

Examples of unconventional water sources are:

Harvesting water from the air with cloud seeding and fog collectors

The atmosphere contains considerable quantities of water vapour, some of which can be captured through cloud seeding and the collection of water from fog and mist.

Cloud seeding can enhance rainfall by up to 15 percent under the right conditions, and studies show that rain enhancement can work with reasonable cost-benefit ratios. An increasing number of countries plan to carry out rain enhancement in response to water shortages and other societal needs.

Remote communities in Chile, Morocco, and South Africa have used vertical mesh nets to harvest fog for over 100 years, and there are viable sites for fog harvesting on every continent.

Every day desalination contributes over 100 million cubic metres of water, supporting approximately 5 percent of the world’s population. While desalination is energy intensive today, innovative technologies such as nanoparticle enhanced membranes and forward osmosis are reducing energy inputs by 20 to 35 percent.

The volume of renewable groundwater is considerable, though much of it tends to be brackish (salty). The seabed near shorelines has considerable volumes of water that is fresh to brackish. Deep inland aquifers with brackish or salty water can process volumes estimated to total millions of cubic kilometres.

Micro-scale capture of rainwater that would otherwise evaporate

In dry environments over 90 percent of rainwater is typically lost to evaporation and surface runoff. Micro-catchment rainwater harvesting provides a unique opportunity to capture water for crop production and local needs. It is an ancient practice that employs a wide range of techniques from rooftop and cistern collection to farm and landscape systems including contour ridges, bunds, small runoff basins and strips.

Under the International Convention on the Control and Management of Ships’ Ballast Water and Sediments, all ships of 400 gross tonnage and above must have onboard treatment options to desalinate ballast water, remove invasive aquatic organisms and unhealthy chemical compounds, and is usable for other economic activities such as irrigation. This water could be sold to port cities in arid regions.

With icebergs, more than 100,000 Arctic and Antarctic icebergs t melt into the ocean each year. These contain more freshwater than the world consumes. Iceberg-harvesting has been very difficult, although new technologies can make this happen, such as wrapping icebergs in a net and then a mega-bag would likely prevent breakup and reduce melting