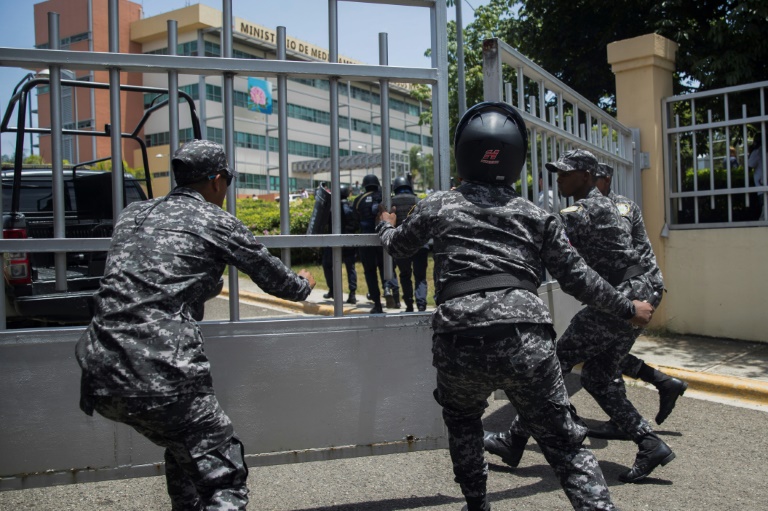 Police close the gate of the Dominican environment ministry headquarters after a shooting, in Santo Domingo, on June 6, 2022 – Copyright AFP/File MANDEL NGAN

The Dominican Republic’s environment minister, Orlando Jorge Mera, was shot dead during a meeting on Monday by a businessman and longtime friend, who has been taken into custody, the government said.

A lawyer and politician, the 55-year-old Jorge Mera was the son of former president Salvador Jorge Blanco (1982-86), and had headed the environment ministry since mid-2020.

“The information we have at the moment indicates that this morning the environment minister lost his life after he was attacked with a firearm in his office,” said Homero Figueroa, the spokesman for the presidency.

“Miguel Cruz, who has been identified as the shooter, was a personal friend of the dead minister,” he said.

Figueroa said the suspect was in police custody and his motive was “under investigation.”

The alleged shooter used his friendship with the victim to gain access to a secure area where Jorge Mera was holding a regular meeting with his deputies, ministry sources told AFP.

According to a statement from Jorge Mera’s family, Cruz was “a childhood friend whom he received in his office.”

According to sources close to the investigation, Cruz and Jorge Mera had found themselves at loggerheads over environmental policy.

Jorge Mera had promised upon taking office in 2020 to work for the “responsible” use of natural resources, to protect ecosystems and slash pollution.

In a March interview with El Caribe and CDN, the minister said he had reported to the judiciary 2,300 cases of environmental permit violations, illegal cutting of trees and damage to mangroves.

Among those affected were active and retired military, police and business people.

President Luis Abinader declared himself “deeply saddened” by the minister’s death, offering his condolences to the victims’ wife and children, while the environment ministry said it was “dismayed” by the attack.

Jorge Mera, who formed the Modern Revolutionary Party alongside Abinader, was president of the Dominican telecommunications institute from 2000 to 2004.

A lawyer, he had also worked as a television producer and presenter.

He came from a political family. His sister Dilia Jorge Mera is a deputy minister, his son Orlando Jorge Villegas is a legislator and his widow Patricia Villegas is the ambassador to Brazil.