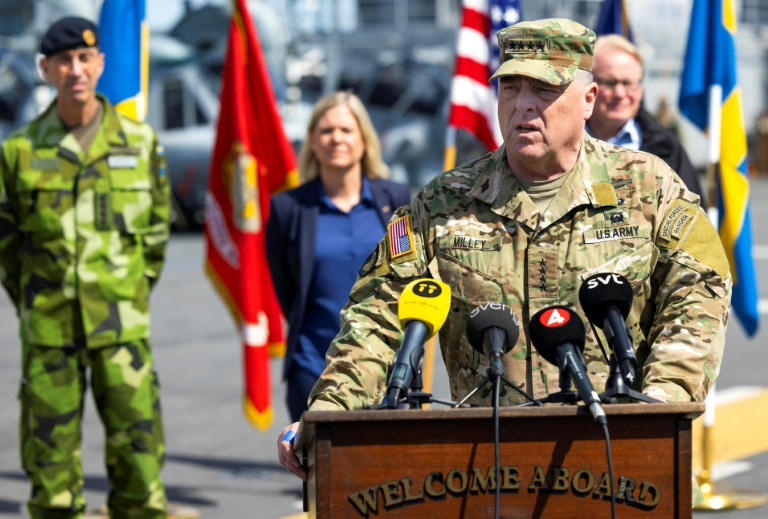 Top US general Mark Milley, speaking aboard the American amphibious warship USS Kearsarge in Stockholm, Sweden ahead of the Baltic Operations ‘Baltops 22,’ said it was important for NATO to ‘show solidarity’ with Sweden and Finland – Copyright AFP Sergei CHUZAVKOV

Top US General Mark Milley said Saturday that the United States is determined to support Sweden and Finland as the countries pursue NATO membership, a statement underscored by his visit to the USS Kearsarge after it became the largest US warship ever to dock in Stockholm.

“It’s important for us, the United States, and it’s important for the other NATO countries to show solidarity with both Finland and Sweden in this exercise,” Milley said ahead of NATO’s annual Baltic Sea naval manoeuvres.

He was speaking during a joint press conference with Swedish Prime Minister Magdalena Andersson.

The “Baltops 22” naval exercise — set to run from June 5 to 17 and involve 14 NATO countries as well as Sweden and Finland — takes place this year in the shadow of Russia’s invasion of Ukraine.

That invasion prompted the two Nordic countries to reverse decades of military nonalignment and apply for NATO membership.

The presence in Stockholm of the USS Kearsarge, an amphibious assault ship designed to deploy land forces, “demonstrates commitment in a common cause, in the rules-based international order, in the idea that large countries cannot invade small countries at no cost,” said Milley, the chairman of the US Joint Chiefs of Staff.

Andersson in turn said the presence in the Swedish capital of the imposing 250-metre-long (840-foot) vessel — with a full complement of helicopters and some 1,200 Marines aboard — “is a concrete expression of the US support and also a very strong political signal at a crucial time in history”.

“It also shows that the security assurances that President Biden was very outspoken on when I and President (Sauli) Niinisto visited him in the White House, is actually followed with concrete action,” the Swedish prime minister added. She and Niinisto met with Biden in Washington on May 19.

“We are very, very grateful” for such support, Andersson said.

Milley met with sailors, pilots and marines aboard the Kearsarge, which is equipped with 10 Osprey transport aircraft, capable of taking off and landing vertically like a helicopter and flying like an airplane.

Asked what message the presence of the ship in the Baltic Sea sends, Milley noted that the Baltops participants will practise “amphibious assaults and scenarios that would involve attacking land that is seized by an adversary or an enemy country,” which was seen as a thinly veiled warning to Russia.

The United States is also considering stepping up its participation in other military exercises in coming months, Milley said.

While NATO Secretary-General Jens Stoltenberg has said repeatedly the two nations would be welcomed “with open arms,” their membership bids are being blocked by Turkey, which  accuses them of providing haven to members of the Kurdistan Workers’ Party (PKK), which Turkey and its Western allies classify as a terrorist group.

Both Nordic countries have sought security assurances during the drawn-out application process — while waiting for full membership, with its guaranteed support from allies under Article V of NATO’s founding treaty.

Pending that, both have called for a stronger US military presence in the Baltic and Northern Europe.