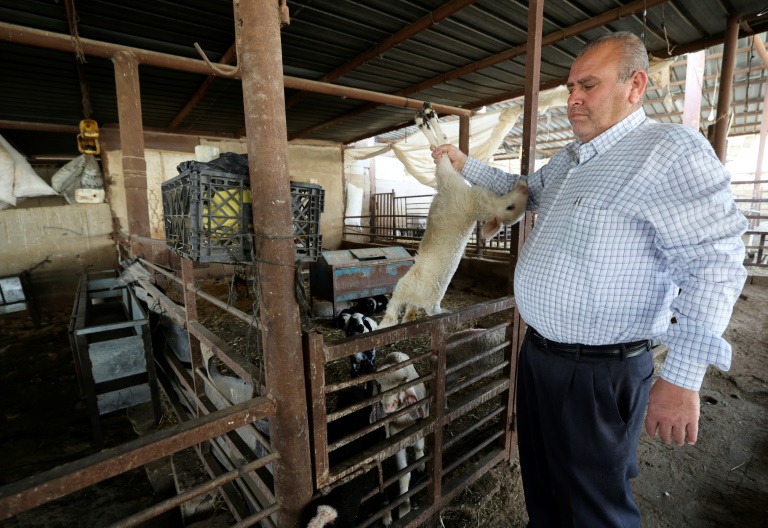 An outbreak of foot and mouth disease in the West Bank has killed thousands of livestock, pushing Palestinian farmers like Mohammed Basheer to the brink of bankruptcy – Copyright AFP JAAFAR ASHTIYEH

An outbreak of foot-and-mouth disease in the West Bank early this year has killed thousands of livestock, pushing Palestinian farmers already living under occupation to the brink of bankruptcy.

Mohammed Basheer said he had to incinerate hundreds of his dead lambs after the outbreak devastated livestock across the West Bank, leaving him with more than just a stinging financial loss.

For Basheer, the ordeal underlines the unique challenges facing farmers in the occupied Palestinian territory, who complain that they are underserved by the Palestinian Authority and face constant threats from Jewish settlers.

“I got no help from the PA, not even a telephone call,” Basheer, who owns thousands of livestock near the city of Nablus, told AFP, voicing frustration over what he described as inaction from the Palestinian agriculture ministry.

Palestinian farmers blamed the PA for halting a vaccinations programme that had proven essential in protecting livestock against an endemic disease.

And with animals absent from large stretches of grazing land, farmers fear land grabs from Jewish settlers who have repeatedly set up illegal outposts on West Bank land they claim is unused.

A new strain of foot-and-mouth disease (FMD), which causes potentially lethal fevers and blisters in young animals, was detected in livestock last November in Jordan.

It soon spread across the West Bank, a territory occupied by Israel since 1967, and heavily reliant on agriculture.

But the PA’s agriculture ministry has not carried out a regular vaccination drive since 2019.

A ministry official, who requested anonymity, told AFP that a normal year sees 60 to 70 percent of goats and sheep in the West Bank vaccinated against FMD.

The Israeli defence ministry body responsible for civil affairs in the Palestinian territories (COGAT) told AFP that the allegation was false.

“There has been no formal request from the Palestinian Authority for the import of such vaccines,” a COGAT statement said.

“Nonetheless, considering the health requirement that has arisen, the State of Israel has transferred vaccine doses that were in its possession to the Palestinian Authority.”

The Palestinian ministry has officially confirmed around 2,000 animal deaths as a result of the FMD strain this year.

But farmers and the agriculture ministry official said livestock deaths were likely far higher than the acknowledged toll.

Basheer said FMD losses had cost him $150,000 and accused Israel of hoarding vaccines.

“Our occupiers had continuous vaccines for all farmers, but we haven’t had anything in three years,” he said.

In the West Bank’s Area C, which remains under full Israeli control, vacant agricultural land is a prime target for Jewish settlement expansion, according to experts.

Eyal Hareuveni, a researcher at the anti-settlement watchdog B’Tselem, told AFP that settler land grabs are often backed by Israel’s “twisted interpretation” of an Ottoman-era law that says land not cultivated for three consecutive years can be claimed.

“Israel can designate this as state land and take it for their own use, even if it’s land that is registered as private Palestinian land,” Hareuveni said.

More than 475,000 Jewish settlers live in the West Bank in communities widely regarded as illegal under international law. Israel’s governing coalition has continued to approve new settler homes across the territory, while acting sporadically against new outposts.

With no new cases detected since April, PA officials say the FMD outbreak is now under control.

Abbas Milhem, executive director of the Palestinian farmer’s union, told AFP that by faltering on vaccinations, the PA had effectively given a boost to the settler movement.

“The real fight against occupation and annexation is in the land, but the farmers can’t stand alone,” he said. “We need some accountability for this.”