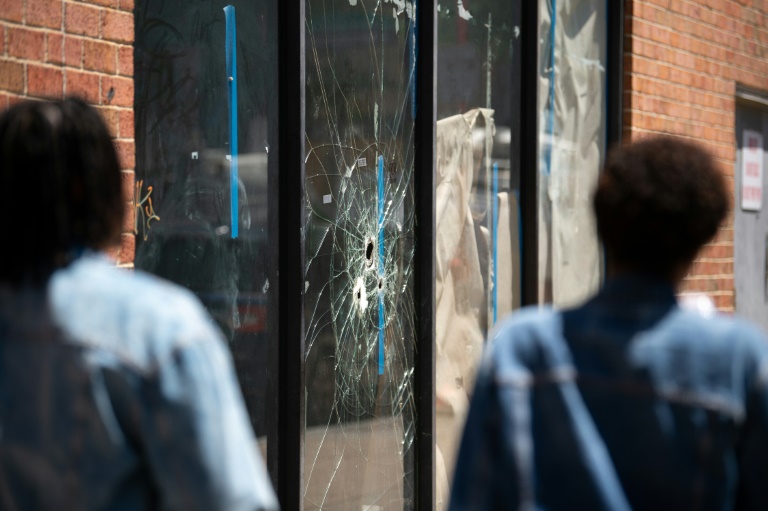 Pedestrians walk past bullet holes in the window of a store front on South Street in Philadelphia, Pennsylvania, on June 5, 2022, the day after a mass shooting left three dead and several injured – Copyright AFP STR

Five people were killed and two dozen others wounded in a pair of weekend mass shootings in the United States, the latest in a string of deadly gun attacks that have left lawmakers scrambling to tackle the crisis.

The shootings — late Saturday in Philadelphia and early Sunday in Chattanooga, Tennessee — further jolted a country facing a gun violence epidemic that has already claimed several thousand American lives this year and shows no signs of abating.

And they come as polarized US senators find themselves under pressure to craft a measure that codifies at least basic, preliminary steps to help reduce the carnage.

In Philadelphia, two men and a woman were killed when multiple people opened fire on a crowd at a popular nightlife area, Police Inspector D.F. Pace told reporters.

He said officers “observed several active shooters shooting into the crowd” of “hundreds of individuals enjoying South Street, as they do every single weekend.”

A chaotic eruption of violence in Chattanooga resulted in 14 people shot including two killed, while another person died and two more were injured after they were struck by vehicles fleeing the scene, police chief Celeste Murphy told reporters, adding “several” victims remained in critical condition.

The pre-dawn incident occurred near a nightclub in a downtown section of Chattanooga, a city of 180,000.

As of mid-Sunday no arrests had been made in either case, Murphy and Philadelphia media said.

Such gun violence has become almost commonplace in America, but the shock felt over recent mass shootings at a grocery store in Buffalo, New York and an elementary school in Uvalde, Texas have spurred ardent cries for action.

Democratic Senator Chris Murphy has been working with a bipartisan group of senators on reform measures — a heavy lift with Republicans routinely rejecting most forms of gun control.

Senator Murphy said Sunday the group hoped to hammer together a legislative package that draws at least 10 Republican votes on top of expected support from nearly every Democrat.

“I think the possibility of success is better than ever before,” he told CNN. “But I think the consequences of failure for our entire democracy are more significant than ever.”

The emerging package, he said, would probably include “significant mental health investment, school safety money, and some modest but impactful changes in gun laws” including an expansion of background checks for gun buyers.

Numerous Philadelphia officers were patrolling South Street when the first shots were heard, a police deployment that Pace described as “standard” for the popular area on summer weekend nights.

But investigators still had “a lot of unanswered questions,” Pace said.

Warmer weather tends to bring a spike in US violence, and in addition to the massacres in Texas and New York, recent weeks have seen mass shootings at a hospital in Oklahoma and a church in California.

Bystander Joe Smith, 23, told The Philadelphia Inquirer his mind had flashed to the recent incidents when he heard shots ring out Saturday.

“Once it started, I didn’t think it was going to stop,” he told the newspaper. “There was guttural screaming. I just heard screams.”

While Republicans have successfully blocked most efforts at gun control for years, some have recently spoken out for change.

The letter, running as a full-page ad in the newspaper, endorsed an expansion of background checks, raising the age to buy guns to 21, and creating “red flag” laws intended to keep guns from people deemed to be at risk of violence.

US President Joe Biden last week called for new gun control legislation, and on Sunday he renewed his call for restrictions on semi-automatic rifles.

A CBS News/YouGov poll published Sunday shows most Americans — 62 percent — back a nationwide ban on semi-automatic rifles. Support is even higher for background checks on all gun buyers (81 percent) and “red flag” laws (72 percent).

US gun violence has killed 18,574 people so far in 2022, including nearly 10,300 suicides, according to the Gun Violence Archive, which tracks shootings nationwide.