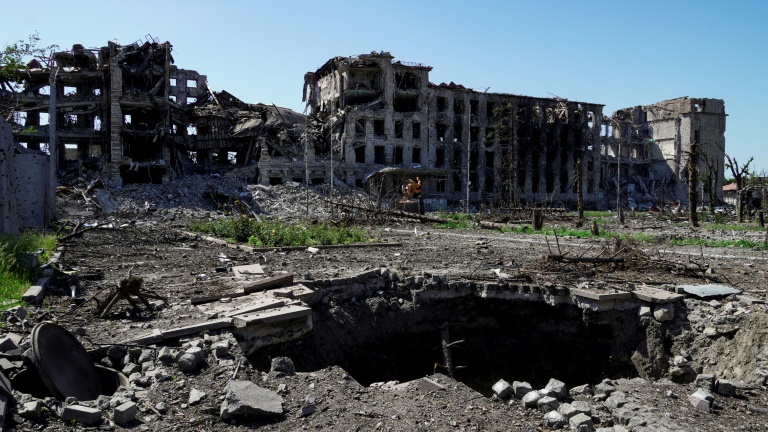 A view of the city of Mariupol, which was almost completely destroyed during the first three months of the war – Copyright AFP Hector RETAMAL

Here are the latest developments in the war in Ukraine.

There are no winners in the conflict, the UN says, as the fighting enters its 100th day with Russian forces pressing deeper into the eastern Donbas region after being driven back from the cities of Kyiv and Kharkiv.

“This war has and will have no winner. Rather, we have witnessed for 100 days what is lost: lives, homes, jobs and prospects,” UN Assistant Secretary-General Amin Awad said in a statement.

Nearly 14 million Ukrainians have been forced to flee their homes since the Russian invasion on February 24, the majority women and children, according to the UN.

“We need peace. The war must end now,” the UN urged.

Ukraine says Russia now controls about one-fifth of its territory, including the Crimean peninsula and parts of the Donbas which were seized in 2014.

NATO chief Jens Stoltenberg warns the West to brace for a long “war of attrition” in Ukraine, in which both sides are suffering high losses.

“We just have to be prepared for the long haul,” Stoltenberg said after talks with US President Joe Biden in Washington, adding that Ukrainians are “paying a high price for defending their own country on the battlefield” but that Russia is also “taking high casualties.”

Stoltenberg said he welcomed efforts by “different countries, including NATO allies” to get grain exports blocked in Ukraine out past a Russian blockade of Ukrainian ports but would not be drawn on whether NATO would get involved.

Cereal prices in Africa have surged because of the slump in exports from Ukraine.

Russia is in talks with Turkey about opening a safe corridor for ships through the Black Sea. The US and EU have accused Moscow of weaponizing food supplies.

Ukrainian forces continue to hold off Russian forces in part of the key eastern city of Severodonetsk.

The region’s governor says Russian forces hold 80 percent of the city but that Ukrainian forces were still holding an industrial zone, a situation reminiscent of Mariupol, where troops held out for weeks at a steelworks before finally surrendering in late May.

Gaining control of Severodonetsk would give Russia de-facto control of Lugansk, one of two regions, along with Donetsk, that make up the industrial Donbas.

Severodonetsk’s sister city of Lysychansk, which sits just across the Donets river, is also coming under heavy shelling, which has destroyed 60 percent of its housing and knocked out internet, mobile phone and gas services, mayor Oleksandr Zaika says.

The regional capital, also called Zaporizhzhia, is still under Kyiv’s control, but the plant fell to Russian forces in March.

The European Parliament bans Russian lobbyists from its premises to prevent them spreading what it calls “propaganda” about Russia’s war in Ukraine.

Ukraine’s central bank more than doubles its key interest rate in an unprecedented intervention aimed at propping up its war-battered economy.

The National Bank of Ukraine (NBU) raised the rate from 10 to 25 percent per annum — the highest since 2015.

The banks says it also aims to “protect households’ income and savings in (Ukraine’s currency) the hryvnia, raise the attractiveness of hryvnia assets” and “reduce the pressure on the foreign exchange market”.