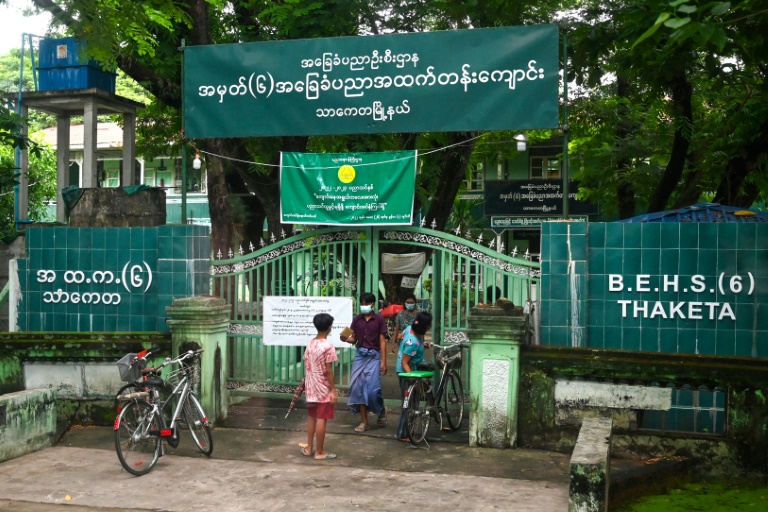 Myanmar students began a new school year on Thursday, with classrooms becoming the latest battleground in the polarised country — the junta is desperate to project normalcy and opponents want teachers and students to stay away.

Public schoolteachers — dressed in the green and white uniforms mandated by the education ministry — were prominent in the early mass protests against the military coup last year.

Sixteen months on, the junta is trying to tempt educators still on strike to return, saying those not judged to have committed serious crimes could have their absence treated simply as “unpaid leave”.

Going back to school, however, comes with risks.

The military has struggled to crush resistance across swathes of Myanmar and low-level officials perceived to be cooperating with the junta are regularly targeted in assassinations.

“Many of my students have joined the People’s Defence Forces (PDF)” that have sprung up to fight the military, said Wah Wah Lwin, 35, a middle school teacher in northwestern Sagaing region.

Wah Wah Lwin said she had been forced to leave her village after she refused to join the teachers strike last year and was accused of being an informant.

Now, as she teaches around 40 students in a makeshift school near a monastery, members of a pro-junta militia stand guard outside, providing protection in the absence of regular security forces.

“We are still worried because PDF… are threatening non-striking teachers,” she said.

The charity Save the Children said there were at least 260 attacks on schools between May 2021 and April this year, with “explosions in and around school buildings” accounting for nearly three-quarters of the incidents.

In the capital Naypyidaw on Thursday, parents arrived by foot or scooter to drop off their children at a crowded school gate.

The headmaster, who did not want to give his name, said there had been a 30 percent increase in enrolment compared with last year.

“We are not too worried about safety in Naypyidaw compared with other regions,” he said, adding that “security forces” were keeping watch around the school.

For Moe Aye, an educator in commercial hub Yangon who was still on strike, Thursday would have marked her 10th year teaching in schools.

“One thing that I miss is wearing the white and green uniform,” she told AFP, requesting the use of a pseudonym.

Moe Aye said she is happier teaching privately, visiting the homes of parents who want to keep their children away from junta-run institutions.

Other teachers supporting the boycott give lessons by video, delivered over the Telegram messaging app.

But with internet access in some regions regularly cut by authorities and rolling power blackouts in Yangon and other cities, online learning can be patchy and frustrating.

Many parents opposed to the junta are still worried about what another year outside the formal education system will do to their child’s prospects.

“I don’t want my children to fall behind when those who can send their children to international school are going to do so,” one Yangon mother told AFP, requesting anonymity.

Although she feared recriminations from neighbours and friends, or even an attack on the school her children go to, she said she had “no choice”.

For another couple in the city, whether or not to send their 12-year-old daughter back to school had been the topic of many arguments.

“I don’t want to send her to school, but my husband overruled me,” said the child’s mother, requesting anonymity.

“He said we can’t keep waiting when we don’t know how long this revolution will last.”