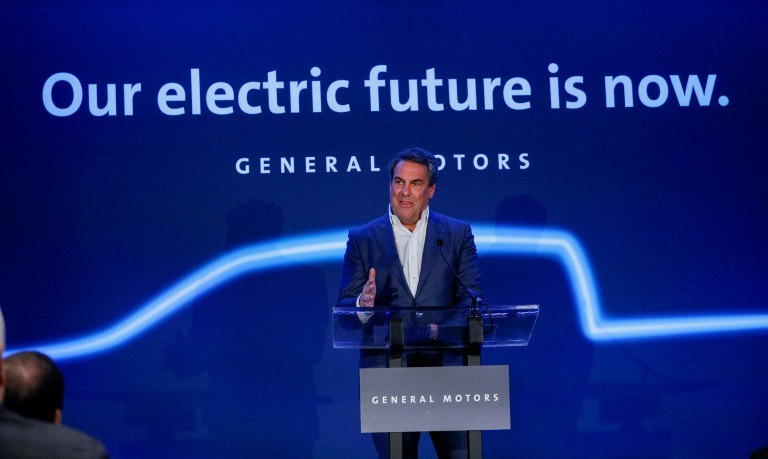 General Motors president Mark Reuss has touted the US car giant’s progress on the road to a future in which all vehicles are electric powered. – Copyright GETTY IMAGES NORTH AMERICA/AFP SPENCER PLATT

General Motor’s autonomous vehicle unit Cruise says it will deploy driverless taxis in San Francisco in a first for a major US city.

Cruise announced the plans for a ride hailing service using self-driving electric cars after the California Public Utilities Commission (CPUC) issued it a permit to give rides without anyone in the driver’s seat.

“This means that Cruise will be the first and only company to operate a commercial, driverless ride-hail service in a major US city,” chief operating officer Gil West said in a blog post late Thursday.

The permit allows Cruise to use its fleet of 30 electric, autonomous cars in a taxi service in some parts of San Francisco.

The robotaxis are not to go faster than 30 miles per hour (48 kilometers per hour) and have a green light to only operate between late morning and early evening, barring foul weather such as thick fog or heavy rain, the CPUC permit states.

“It is a major milestone for the shared mission of the (autonomous vehicle) industry to improve life in our cities.”

San Francisco police earlier this year faced an unprecedented problem when an officer stopped a car that was driving at night with no headlights on, only to discover there was no one inside.

The vehicle, it turned out, was a self-driving Cruise car, and the police officer’s encounter was captured by a passerby, who posted video on social media.

Cruise took to Twitter to say that the self-driving car “yielded to the police vehicle, then pulled over to the nearest safe location for the traffic stop, as intended. An officer contacted Cruise personnel and no citation was issued.”

Cruise explained that the headlights were turned off due to human error.

Founded in 2013, Cruise has developed software that allows cars to drive themselves completely autonomously.

General Motors owns the majority of shares in the company, valued at more than $30 billion thanks to investments by companies such as Microsoft, Honda and Walmart.

Cruise rival Waymo last year expanded its robotaxi service to riders in San Francisco, but has “specialists” at the steering wheels to take over driving if needed.

The move expanded a Waymo ride-hailing program which has been operating in Phoenix, Arizona since 2017.