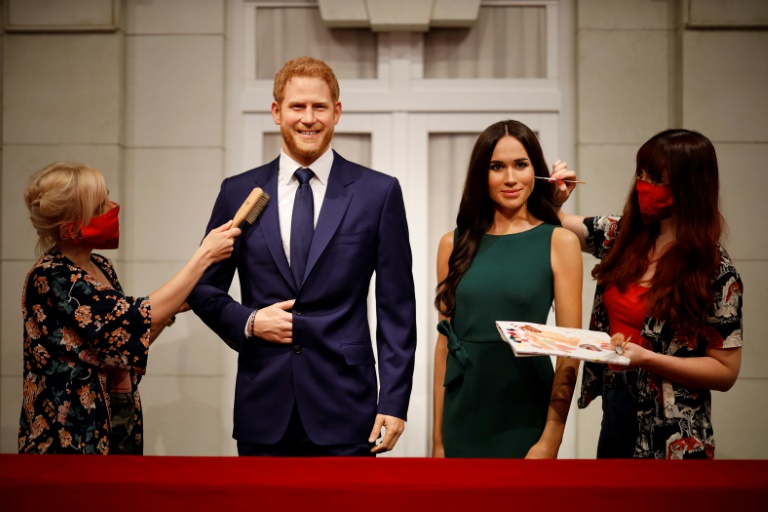 Prince Harry and Meghan, also known as the Duke and Duchess of Sussex, have flown in for the queen’s Platinum Jubilee celebration from the US – Copyright AFP Tolga Akmen

Prince Harry and his wife Meghan were on Friday expected to make their first public appearance in Britain in two years, at a church service for Queen Elizabeth II.

But any hopes that the family would be all back together were scuppered after his grandmother overdid it at Thursday’s launch of the four days of celebrations for her historic Platinum Jubilee.

Buckingham Palace said the 96-year-old monarch, who has been dogged by mobility problems for months, experienced “some discomfort” after two public appearances on the balcony after the Trooping the Colour military parade.

“Taking into account the journey and activity required to participate in (Friday’s) national service of thanksgiving at St Paul’s Cathedral, Her Majesty with great reluctance has concluded that she will not attend,” it added.

There will be no sign either of the queen’s second son Prince Andrew, who was not at Thursday’s parade. It was later announced he had tested positive for Covid.

Royal officials have reportedly urged the queen to pace herself during the public events for her record-breaking 70 years on the throne because of her difficulties standing and walking.

What the palace has described as “episodic mobility problems” forced her to pull out of engagements since October last year.

But her heir Prince Charles, 73, will be there to represent her as the most senior-ranking royal, in preparation for his future role as king.

On Thursday, he stood in for his mother at the Trooping the Colour, taking the salute on horseback.

More than 400 people have been invited to Friday’s service, including health and social care staff to give thanks for their work during the Covid pandemic.

The Bible readings, prayers and hymns on Friday are designed to reflect on and recognise what the palace said was the queen’s “lifetime of service”.

Former British Army captain Harry and American television actress Meghan, who is of mixed race, were once hailed as the modern face of the monarchy after they wed in 2018.

But less than two years later they quit royal life and moved to the United States, launching a series of damaging broadsides, including of racism.

The couple’s attendance was as good as confirmed last week, when their biographer Omid Scobie told reporters in London they would be there.

The Duke and Duchess of Sussex, as they are formally known, kept a low profile on Thursday and were excluded from the royal balcony appearance because they are no longer “working royals”.

Andrew is in disgrace and has effectively been stripped of his royal position. His no-show avoids further controversy amid lingering public anger at his settling of a US civil claim for sexual assault earlier this year.

His appearance at a memorial service for his father, the queen’s late husband Prince Philip, in late March, was criticised as inappropriate.

British newspapers, particularly the tabloid press, have been Harry and Meghan’s harshest critics, and warned them not to “hijack” the celebrations.

One commentator in the Daily Mail even said they had “no right” to participate in the jubilee, after their damaging criticisms of the institution.

“I believe I speak for many when I say: Harry and Meghan, you are not welcome. Please just stay away,” wrote Amanda Platell.

Harry, 37, and Meghan, 40, have set up a charitable foundation in California, but angered royal supporters for leaving and then lifting the lid on royal life in a bombshell television interview.

A recent YouGov poll indicated the couple’s popularity with the British public has slumped to an all-time low.

Nearly two-third (63 percent) hold a negative view of them.

All eyes will be watching for signs of tension with other family members, notably Harry’s elder brother William, 39, or Meghan with William’s wife Kate.

Harry said in an October 2019 that he and William were on “different paths”, apparently confirming a rift that opened up after he began dating Meghan.

The pair were last seen in public at the unveiling of a statue to their late mother princess Diana in July 2021, and at the funeral of their grandfather, the queen’s husband Prince Philip, that April.

William has been the only senior royal to publicly comment on Harry and Meghan’s racism claims, saying: “We are very much not a racist family”.

Harry and Meghan, who have two young children Archie and Lilibet, made a private visit to see the queen at Windsor Castle in May.