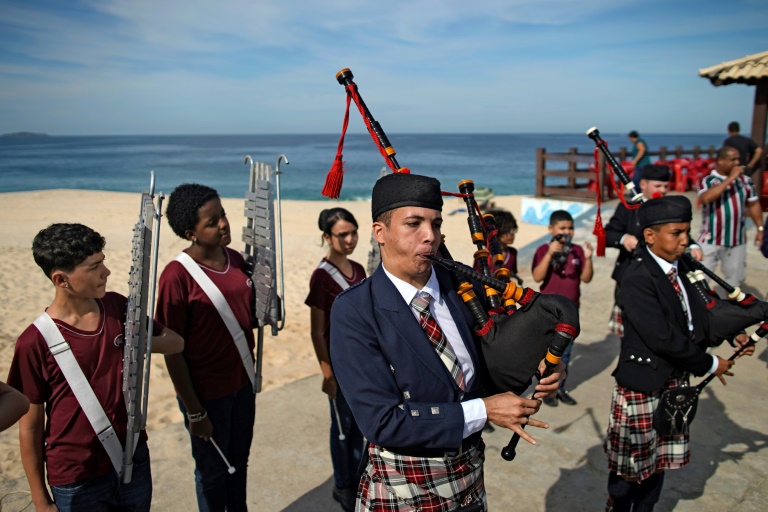 Bagpipe students, members of the Vieira Brum music band, play at the Marica beach in Brazil, on May 28, 2022 – Copyright AFP Tolga Akmen

It’s a gorgeous day at the beach in Brazil: the bright blue ocean sparkles in the sun, the palm trees sway in the breeze and the peaceful sound of… er, bagpipes?

Thousands of kilometers (miles) from the United Kingdom, the kilts are out on a Rio de Janeiro beach that suddenly looks like something out of the Scottish Highlands.

Eleven-year-old Davi Portugal is playing a set of bagpipes nearly as big as he is, inflating his cheeks to tennis-ball-size with every breath.

“I love the sound. It’s beautiful and different,” says the young Brazilian, whose dream is to join the navy.

He and his older brother Caio, 14, are both members of their school band in Sao Goncalo, a poor neighborhood on the outskirts of Rio, where playing the bagpipes is a surefire way to turn people’s heads.

“The first time I saw the bagpipes, I definitely did not want to play them, because I thought it was weird to wear a kilt. It looks like a skirt, which is kind of taboo in Brazil,” says Jhonny Mesquita, 32, the director of the school band.

“But later, I fell in love with the sound. When I started learning about the history of the instrument and what it represents to the Scottish people, it turned into a passion.”

In 2017, Mesquita got the chance to pursue his passion back at its source when he traveled to Scotland for two weeks.

He shot to fame there thanks to a video of him juggling a football at a stadium in Aberdeen, all while playing “Asa Branca,” a Brazilian classic, on the bagpipes.

“It was a huge success. The local newspapers called me the ‘Pele of the bagpipes,’” he says, sporting a black, red and white tartan kilt and leather pouch, called a sporran, like the other members of the group.

Mesquita, a grade school music teacher, is famous in Sao Goncalo, too: he has played the bagpipes on Brazilian TV and at Rio’s famed Municipal Theater.

But he says his proudest moments are seeing young people from tough neighborhoods fall in love with music via the bagpipes.

“The essence of the project is engaging young people and occupying their minds so they stay away from drugs and crime,” he says.

In addition to leading the school band, he is head of the Brazil-Scotland Association, a group of 18 bagpipers who play in “places people don’t want to go,” such as juvenile detention centers.

Mesquita himself learned the bagpipes at 15, thanks to a serviceman who played in a navy band.

He says he decided to teach kids how to play the instrument at the school he attended — the same one where he is now band director, training the next generation of kilt-wearing Brazilians.

Mesquita mainly relies on donations and ingenuity to keep his association going on a shoestring budget.

“Most of our bagpipes were donated, mainly from overseas. The kilts are made by the mom of one of our members,” he says.

The group was invited to play a festival in Belgium in July, but did not have money for plane tickets.

But the “Pele of bagpipes” is not letting that get his spirits down.

He sees the instrument opening new horizons for his students all the time, he says.

“It’s been a watershed for them. I’ve seen young people who didn’t seem to have a promising future win scholarships or join the navy and air force bands,” he says.

“It’s very moving to watch my son play,” says Alice Cortes da Silva, a former student at Mesquita’s school, as she watches her nine-year-old play tambourine in the group.

“His dream is to move from tambourine to bagpipes. He’s very dedicated. He’s even started doing better at school,” she says proudly.