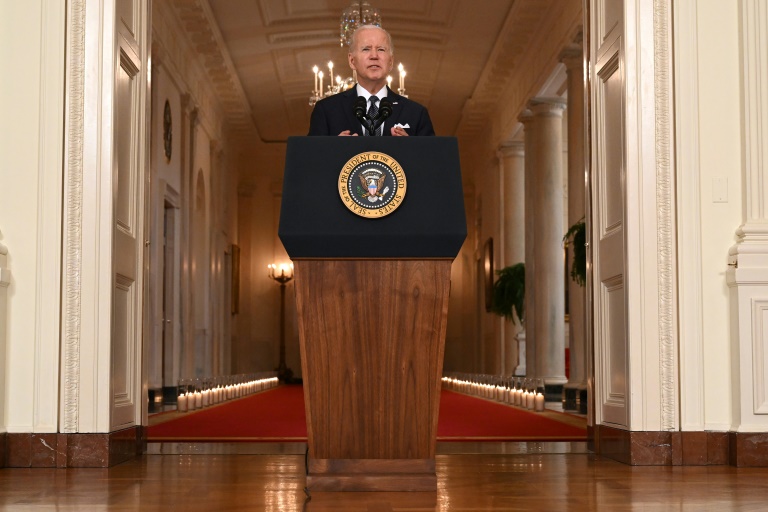 US President Joe Biden urges Congress to pass laws to combat gun violence in an address from the White House on June 2, 2022 – Copyright AFP SAUL LOEB

US President Joe Biden pleaded with lawmakers Thursday to take action on gun violence plaguing the country, calling for a ban on assault weapons such as those used in recent massacres in Texas and New York state.

Biden’s made the 17-minute address — his latest appeal for tougher firearms laws — with 56 lighted candles arrayed along a long corridor behind him to represent US states and territories suffering from gun violence.

“How much more carnage are we willing to accept?” the president asked in the speech, which he delivered with anger in his voice, at times dipping close to a whisper.

“We can’t fail the American people again,” he said, condemning the refusal of a majority of Republican senators to support tougher laws as “unconscionable.”

At a minimum, Biden said, lawmakers should raise the age at which assault weapons can be purchased from 18 to 21, one measure to help curb rampant violence that has turned schools and hospitals into “killing fields.”

He also urged them to take steps including strengthening background checks, banning high-capacity magazines, mandating safe storage of firearms, and allowing gun manufacturers to be held liable for crimes committed with their products.

“Over the last two decades, more school-age children have died from guns than on duty police officers and active duty military combined. Think about that,” Biden said.

While Republican lawmakers have largely resisted tougher gun laws, a cross-party group of US senators held talks Thursday on a package of firearms controls.

Nine senators have been meeting this week to discuss a response to the mass shootings that have appalled the nation, projecting optimism over the prospects for modest reforms.

The group has focused on school security, bolstering mental health services and incentives for states to grant courts “red flag” authority to temporarily remove guns from owners considered a threat — a step Biden also called for in his remarks.

Even as lawmakers were mulling response to the racist murder of 10 Black supermarket shoppers in Buffalo and the school shooting in Texas that killed 19 children and two teachers, another attack took place in Oklahoma on Wednesday.

A man with a pistol and a rifle murdered two doctors, a receptionist and a patient in a Tulsa hospital complex before killing himself as police arrived.

Lawmakers are aware that they risk wasting momentum as the urgency for reforms sparked by the killings dissipates, and another smaller group of senators is holding parallel discussions on expanding background checks on gun sales.

The political challenge of legislating in a 50-50 Senate, where most bills require 60 votes to pass, means that more wide-ranging reforms are unrealistic.

Mitch McConnell, leader of the Senate Republicans, told reporters that senators were trying to “target the problem” — which he said was “mental illness and school safety” rather than the availability of firearms.

House Democrats are nevertheless set to pass a much broader but largely symbolic “Protecting Our Kids Act,” which calls for raising the purchasing age for semi-automatic rifles from 18 to 21 and a ban on high-capacity magazines.

The package will likely pass the Democratic-led House next week before dying amid Republican opposition in the Senate.

With regulation being so difficult at the federal level, an effort is also underway among state legislatures to push for tighter gun laws.

California lawmakers advanced a gun control package in the aftermath of the Uvalde shooting that included proposals to open up gunmakers to civil legal liability in certain cases.

The proposals echo action by lawmakers in New York state, while a permit-to-buy bill is moving through the Delaware legislature and pro-gun rights Texas is looking to “make legislative recommendations” in response to the Uvalde shooting.

Activists for greater restrictions fear a setback at the federal level however as the Supreme Court is set to issue its first major Second Amendment opinion in more than a decade.

Justices are expected to rule in the coming weeks in a dispute over New York state’s stringent limits on the concealed carry of handguns outside the home.

A narrow opinion could affect just a few states with similar laws, but campaigners fear the conservative majority will make a broader ruling clearing the way for constitutional challenges to gun safety laws across the country.