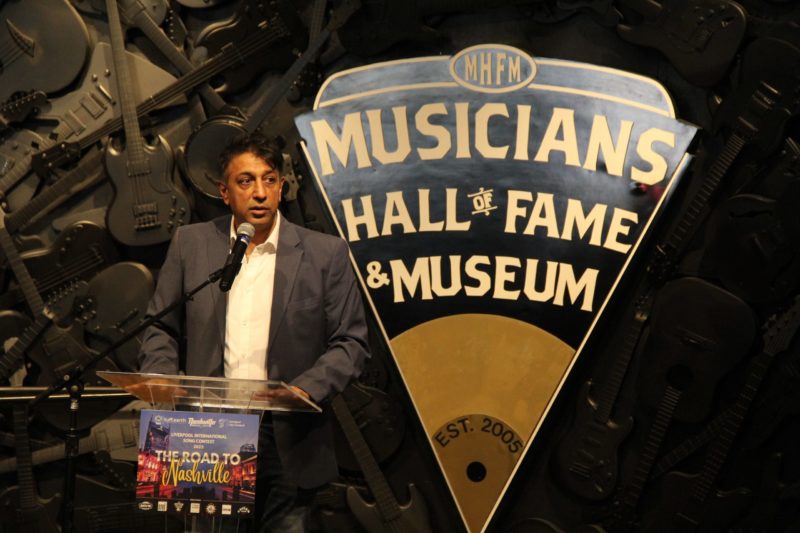 Dr. Talwar chatted about The Unity of Faiths Foundation (TUFF), The Road to Nashville, as well as the Liverpool International Song Contest.

What was the inspiration for founding TUFF.earth (The Unity of Faiths Foundation)?

As a child, I witnessed my father taking me to every place of worship as he led the first-ever interfaith center in the ’70s in London U.K. It didn’t matter if I entered a church, synagogue, mosque, or temple of any faith, every time I asked my father where we were going, he would say “we are going to the house of God.” So, for me, it didn’t matter what religion, culture, or skin color you were. I knew only one thing, and that was…There is only one religion, the religion of love.

Then, after decades passed. While I was in India in 2010, I was struck with the idea of The Unity of Faiths Foundation (TUFF), which I co-founded with Anna Prior (an art dealer from London). We both were despondent by the lack of human connection that technology was propagating. We felt the need to fix this issue; the solution must be something extremely effective and impactful.

What a combination of a psychologist and an art dealer coming together to help support humanity.

We came up with the idea to empower the youth and their communities through participation in sports, art, and leisure and to learn human values, tolerance, integration, gender equality, and such necessary ideas.

We realized if everyone took the responsibility of taking care of each other and accepting without discrimination, as my dad did, that the world could be a paradise. And thus, we used unique methods to educate children about the right values. Today, we have centers in the UK, Iceland, India, Belgium, Australia, and now in the US.

Our mission includes making TUFF an integral part of the curriculum in every school. World leaders like President Barack Obama, President of Iceland Guðni Thorlacius Jóhannesson, and HH Pope Francis are supporters and patrons, with HM the Queen having acknowledged the foundation. Personalities like Diego Maradona and Jackie Chan are our great supporters too.

TUFF has another interesting aspect to it. The children whom we have supported through the program said that The Unity of Faiths Foundation was a very long name to pronounce and as the world is facing some tough times, it needs to be tough too, and we live in tough estates, so we are TUFF kids thus TUFF happened.

The best form of appreciation came our way when the people whom we had helped called us the “Gatekeepers of Unity.”

What are some of TUFF’s initiatives globally?

One of our most recognized campaigns was #Kind20 across the social media platforms which were used more than 6.7 million times.  The goal was to spread acts of kindness globally online.

You did the first Liverpool International Song Contest in Liverpool. How did that come about?

In 2020, the Liverpool City Council played a key role in supporting the International Song for Kindness which was created by TUFF (The Unity of Faiths Foundation) to support our wider goals of empowering young people and promoting acceptance, equality, and respect for other cultures.

The connection with Liverpool came about because TUFF developed the global #KIND20 campaign as a way to demonstrate and promote social integration, which reached a staggering 6.7 million people from around the world. After conversations with The Cavern Club and other organizations in Liverpool, TUFF came up with the idea of an International Song Contest to celebrate what would have been John Lennon’s 80th birthday on 9th October 2020.

The Liverpool International Song Contest is a vehicle used to tackle discrimination and the stigma of mental illness, providing support for those most in need and developing a bespoke mental health service infrastructure specifically tailored toward those in the creative sector.

Participants in the 2020/21 Liverpool International Song Contest were invited to attend one of 23 workshops across the Liverpool City region & UK delivered by TUFFs Music division and led by TUFFs co-founders Anna Prior & myself Dr. Shamender Talwar FRSA (renowned social psychologist) and Liverpool based producer Daniel Xander BSc MA (TUFFs Head of Music).

These engaging workshops provided education in music, production, and human values, and provided education on mental health and one-to-one counseling with mental health practitioners. As well as the thousands who attended the in-person workshops, TUFF also provided an International online version of the syllabus for those unable to attend who lived abroad and also through medical reasons, covid-19 and/or mental health disorders such as social anxiety and depression.

This online digital format provided people with the same opportunities and one-to-one counseling, delivered in a way that best suited their needs.

Kevin McManus, Head of UNESCO City of Music, was involved on behalf of Liverpool city and attended the final event at The Cavern in October 2021. The songs were judged by an impressive panel of industry figures (including Adele’s agent and respected musician/songwriter Andrew Roachford, MBE, who had several hits with his band Roachford) who all attended the event in Liverpool. Entries were received from 28 countries in the inaugural contest.

Talk about how and why the mental health component became part of the contest.

Being a social psychologist and co-founder of TUFF, I saw many musicians and songwriters in the world going through a very rough time because of COVID. So, bringing the magic of music and the supporting hands to handle mental health issues together with a sprinkle of kindness empowered the helpless. This time, we have Nashville; so many more thousands will be saved.

How did The Road to Nashville develop? Explain the relationship between the cities and what you hope to accomplish.

Liverpool and Nashville have been trying to work together for many decades; however, because of political situations, this didn’t manifest. So, Liverpool asked TUFF to be the bridge of unity and togetherness to bring Nashville on board with the project.

So, after nine miraculous weeks, lots of blood, sweat, tears of joy, and lots of dedication from all parties on both sides of the pond, a global historic project was launched, linking Nashville & Liverpool together to support musicians & songwriters by advancing mental health awareness while promoting diversity and understanding.

With a live stream simultaneously in both Nashville USA & Liverpool U.K. on May 9, 2022, a press conference announced a joint initiative by both mayors. The mission is to advocate for mental health while also championing the search for the best songwriters worldwide.

The Road to Nashville – Liverpool International Song Contest 2022 is a seven-month project, which highlights original material by global songwriters & musicians with a unique infrastructure to support them with mental health services and counseling.

By bringing two of the world’s biggest music cities Nashville & Liverpool together, we will bring awareness to many situations like the stigma often associated with mental illness.

What are you looking for in a song submitted to the contest?

In 1964 four boys came from Liverpool to the US with the message of HELP (Hope, Equality, Love, and Peace). And they changed the world.

In 2022 Liverpool has come once again to the US hoping to spread that same message of togetherness with Nashville and change the world once again. So, with a song and an anthem, the “Imagine” of the 21st century can be born.