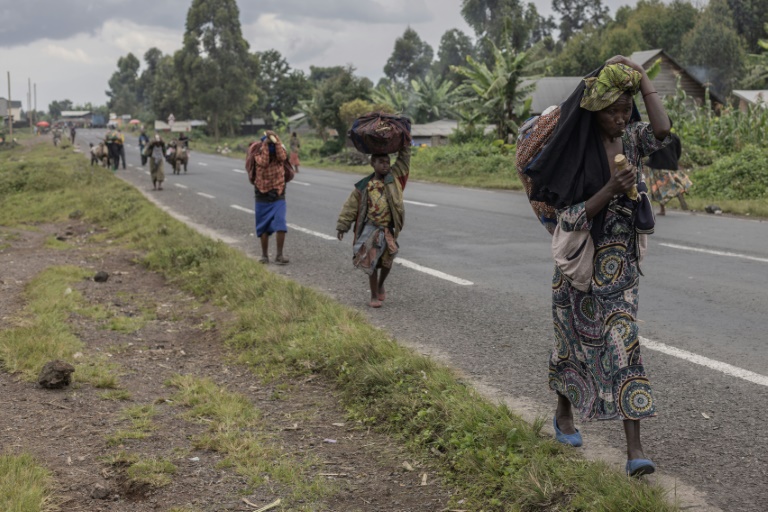 People who fled fighting between DR Congo’s army and M23 rebels have begun to make a nervous return home, with tensions in the volatile east of the country remaining on a hair trigger.

Last month, clashes with the M23, a primarily Congolese Tutsi group, erupted in North Kivu province and spread near its capital Goma, a trading hub of a million people.

The fighting sparked concerns that the city would fall — as well as fears that it would trigger a regional conflagration by drawing in neighbouring Rwanda.

The Democratic Republic of Congo (DRC) has accused Rwanda of backing the M23 — an allegation that caused relations between the two central African states to plummet. Rwanda has denied the claim.

Returnees who had fled clashes in Nyiragongo, a territory in the foothills of two volcanoes, said their future was clouded.

“I’ve only just got back, but we’re not going to sleep here, we’re afraid of the Rwandan army returning at any moment,” said a young woman named Deborah, speaking outside her home in Kabuhanga, which lies close to the border.

Like other local people, the 17-year-old said she had seen Rwandan regulars fighting alongside M23 rebels.

On May 24, heavy shelling forced her to leave her home, said Deborah, whose last name AFP is withholding for security reasons.

“When we got home, we found nothing in the house. Everything had been looted.”

Some 72,000 people fled Nyiragongo and neighbouring Rutshuru territory in just eight days, according to the United Nations.

M23 fighters captured Goma in late 2012 before the Congolese army quelled the rebellion the following year.

But the militia resumed fighting in late 2021 after accusing the government of failing to respect a 2009 agreement under which its fighters were to be incorporated into the army.

Since last week, DRC’s government has accused Rwanda of backing the group, and it barred flights from Rwanda’s national carrier as part of the worsening spat.

Congolese security forces also detained two Rwandan soldiers it said had been trespassing in the east of the country, before announcing on Tuesday that they would be released.

Rwanda, for its part, said a Hutu rebel group in DRC had kidnapped the soldiers. It also accused DRC last month of firing shells into its territory.

Several people interviewed by AFP in the areas where recent clashes occurred claimed that M23 rebels had fought alongside Rwandan soldiers.

In the village of Kingarama, residents said a freshly-dug grave contained the remains of a 40-year-old farmer named Gato Basisite, allegedly killed during a mixed Rwandan-M23 attack.

“I saw them with my own eyes,” said a man named Augustin, aged 30. “They were in Rwandan uniforms, and the M23 had Congolese uniforms,” he added.

While some people have begun to return home, others are apparently staying away.

Kabuhanga, a usually bustling border settlement, is deserted. Most of the town’s population has fled closer to Goma. The nearby hospital has also shut its doors since medical staff fled the M23 offensive.

Many of those who have braved returning home did so after the DRC’s army regained some of the initiative against the rebels.

Esperance, a 40-year-old mother of six, was one such woman. “We have to build a wall and close the border with Rwanda,” she told AFP, while peeling potatoes in her vegetable plot.

The road leading north out of Goma now has a heavy military presence. People trudge home along it under a low grey sky, lugging goods and trailed by sheep.

Ndagijimana Barayavuga, standing beside his wife and four children with a rolled-up mattress on his head, said he had no choice but to return home.

“It’s better to die from a bullet than from hunger,” he said.