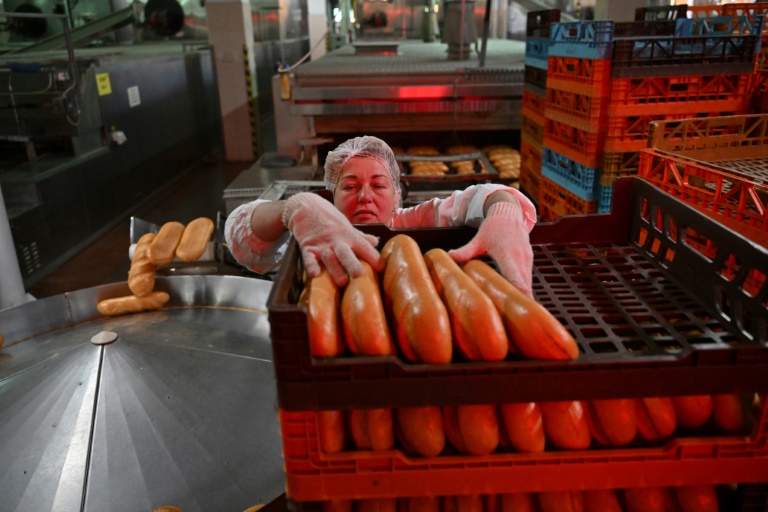 Balls of dough file past on the assembly line and a sweet scent fills the air at a bread factory that embodies Ukraine’s determination and its tentative recovery 100 days on from Russia’s invasion.

Located near the capital Kyiv, the Tsar-Khlib factory continued production even as Russian troops advanced, keeping city residents fed despite a missile attack on a neighbouring facility.

Tsar-Khlib had to contend with extreme challenges.

At one point, the factory was less than eight kilometres (five miles) from the front line, and many of the factory’s workers were stranded in territory held by Russian forces. Most of its clients had fled to safety.

“But we quickly realised that we had to keep producing because some people were staying on,” said Anton Paliy, the 43-year-old head of production.

In the end, the immediate crisis passed, as Russian troops withdrew from the area at the end of March.

Operating with just a fraction of its 800 employees, the factory continued producing 16 tons of fresh bread a day, compared to its normal level of 100 tons.

When the air raid sirens sounded, workers would run into the basement. When they returned, they would find messy piles of fresh bread outside the oven.

Paliy said the sound of the machinery drowned out the noises of war in the background, making the situation a little more bearable “psychologically”.

The state-of-the-art Shanta factory, just a few hundred metres away, was not so lucky. Russian missiles destroyed the building on March 16.

Oleksandr Tarenenko, the director of Khlibni Investizii, which owns both facilities, said the attack was a war crime because Russian forces had targeted civilian infrastructure.

A missile shot down by Ukraine’s air defence forces can still be seen outside the building.

Reconstruction could be lengthy and costly, and the facility’s 140 workers are unemployed.

But at Tsar-Khlib, activity is picking up as Kyiv residents return to the city.

The International Monetary Fund expects Ukraine’s economy to shrink by 35 percent this year, but parts of the country are slowly recovering despite the ongoing conflict in the south and east.

In Kyiv and the surrounding region, “consumer demand is increasing, connections are being restored”, Finance Minister Sergiy Marchenko told AFP.

Even the return of foreign embassies was sending a signal to the public that the capital is open for business and residents were returning to “re-launch their economic activities”, Marchenko said.

Even in Ukraine’s second biggest city, Kharkiv, whose outskirts are still being shelled by Russian forces, there are some signs of recovery.

The popular Cafe Crystal, in a central park, re-opened its doors at the end of April after two months, although the menu is limited, and the staff are down to seven or eight from 30 or 40 before the war.

“We have to keep jobs. The city is gradually reviving. People want to come out and have a coffee,” said Alyona Kostrova, the manager.

“After staying in bomb shelters, they want to live a little.”

At Tsar-Khlib, production has gone up to 50 tons a day and Paliy said he felt at least some comfort in “feeling useful in these difficult times”.

“And we will continue to do it.”