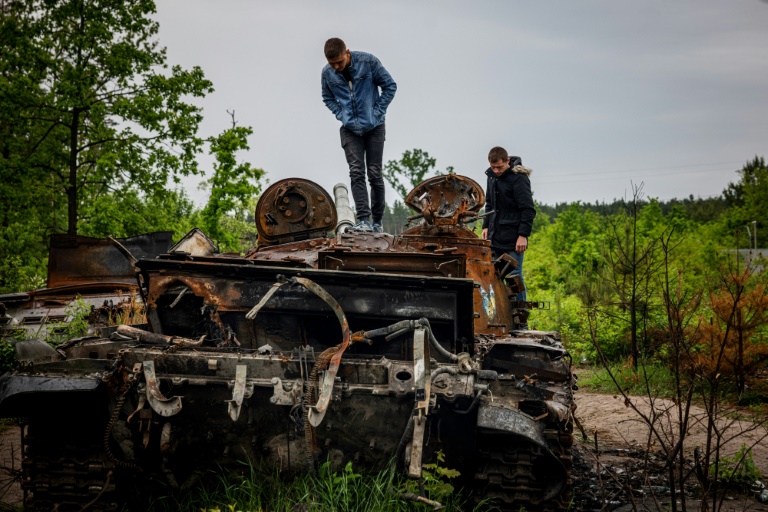 – Ukraine to get medium-range US rockets –

President Joe Biden says the US will send more advanced rocket systems to Ukraine to help its troops repel Russian forces, who are gaining ground in the east.

Washington says the HIMARS multiple rocket launchers will allow Ukrainian forces to “more precisely strike targets on the battlefield from greater distance inside Ukraine”, but not attack Russian territory.

Kyiv’s outgunned military had been pleading for more advanced weapons to help it fend off Russia’s offensive in the eastern Donbas region.

Russian forces seize control of most of the eastern Ukrainian city of Severodonetsk, after weeks of fighting for the key industrial hub in Lugansk, one of two administrative regions that make up Donbas.

Evacuations from the city have been halted by the fighting. On Monday, a French journalist accompanying a bus of evacuees was killed by Russian shelling.

“For the Russian military, for Russian commanders, for Russian soldiers, any madness is absolutely acceptable,” Ukrainian President Volodymyr Zelensky says in a video address on Telegram.

– Ukraine to Macron: Please visit us –

Ukraine’s foreign minister asks French President Emmanuel Macron to visit the country before the end of June, when France’s presidency of the EU ends.

“It would be good that Macron came during the French EU presidency, and the best thing would be that he comes with more weapons deliveries for Ukraine,” he tells French news channel LCI.

Gazprom has cut gas supplies to the Netherlands, Finland, Bulgaria and Poland for the same reason.

On a visit to The Hague, Ukraine’s prosecutor general Iryna Venediktova says some 15,000 cases of alleged war crimes have been reported countrywide since Russia’s invasion on February 24.

Dozens of container ships are blocked in Ukrainian ports which have been blockaded by Russian vessels. Russia is in talks with Turkey about creating a secure corridor for shipping companies.

Macron says he and German Chancellor Olaf Scholz have urged Vladimir Putin to end Russia’s blockade of the major Ukrainian Black Sea port of Odessa under the terms of a UN resolution.

Two Russian soldiers are sentenced to more than 11 years in jail in Ukraine for breaching the rules of war by shelling civilian areas in the northeastern Kharkiv region.

Their convictions come a week after a Kyiv court sentenced a 21-year-old Russian soldier to life in prison for shooting dead an unarmed civilian on his bicycle.