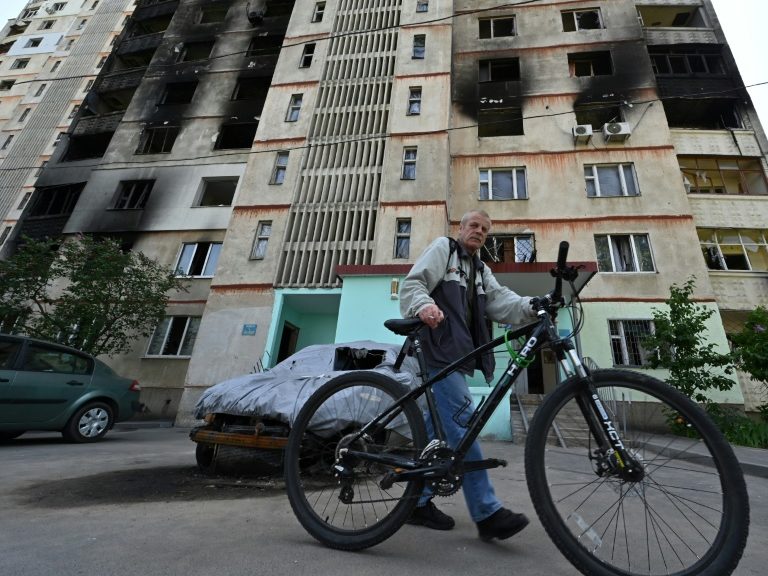 As investigators surveyed the damage in a bombed-out block of buildings in Saltivka, on the outskirts of the eastern city of Kharkiv, residents gathered around them.

They were dispatched to decide if this attack constituted a war crime: some of the locals were hoping in vain for a quick answer as to who might compensate them for their devastated homes.

While the investigators were not able to provide clarity on that issue, they nevertheless took note of the immense destruction around them.

Floor by floor, they went through the building, accompanied by its former residents.

Seventy-year-old Mykola Tymchenko’s flat was a complete ruin after a fire started by a Russian strike swept through it: furniture, bedding, decorations, all reduced to ashes.

“The kitchen was here,” he said. “The bathroom and the toilet were here.

“I lost my wife before New Year. Now I’ve lost my flat,” he added. “I took years to pay for it and in one moment…”

In the neighbouring stairwell, the damage was less visible.

One flat belonging to Oleksandr Ryabokon, 30, had had its windows blown out by the force of a Russian strike, glass and bits of wall scattered all over.

Having got his wife and children to safety, he was now gathering up their affairs in bags to keep out of the hands of “thieves and looters”, he said.

One of the recovered treasures was a painting of his great-grandmother wrapped in a film of plastic to keep out the dust.

He did not yet know whether the building would be patched up or condemned as beyond repair and demolished. He did not know if he would be compensated.

He did have hopes, however, that the authorities would allocate him new housing.

At the top of the building, meanwhile, the investigators continued to take stock.

They inspected a gaping hole in a wall and the remains of a projectile.

“An expert will decide what type of shell it was,” said 33-year-old Oleksandr Glebov, one of the Kharkiv investigators from the prosecutor’s office.

At the beginning of the invasion in late February, Russian troops got as close as the outskirts of Kharkiv — including Saltivka — before being pushed back by Ukrainian forces.

It was at that point that many buildings here were hit.

Since then, Russian forces have focussed their attacks elsewhere, but the artillery duel between the two sides has thundered on, shells falling regularly on this working-class district.

Before the war, half-a-million people lived here. Most of them have since fled.

Glebov explained how the prosecutors proceeded.

“During the investigation, we ask the victims the same question: ‘Were there any military objectives next to your house?’”

At this stage, he added, he could not say for sure whether the Russians had been targeting civilians or whether it was just inaccurate fire, military error.

The district bears the traces of hundreds of projectiles having fallen since the beginning of Russia’s invasion.

They had talked to the owners on every floor, he said.

“These are war crimes. We are recording them.”