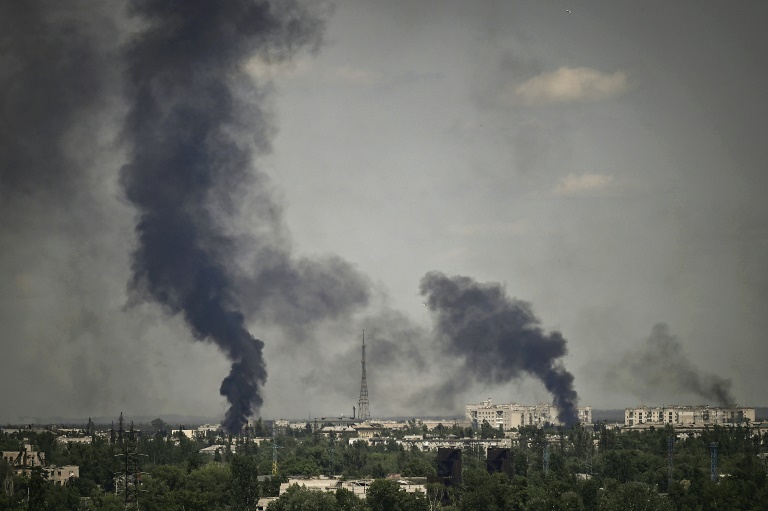 Russian forces have taken partial control of the eastern city of Severodonetsk, the easternmost city that was still held by Ukraine – Copyright AFP ARIS MESSINIS

EU leaders agree to ban most Russian oil imports, after reaching a deal with Hungary that allows it to keep receiving Russian crude.

The deal bans oil imports delivered by tankers but exempts pipeline deliveries, a key demand of landlocked Hungary, whose leader Viktor Orban had warned that a full oil blockade would be an “atomic bomb” for his country’s economy.

European Commission chief Ursula von der Leyen says the accord will cut around 90 percent of the EU’s Russian oil imports by the end of the year.

After weeks of bombardments Russian forces take partial control of the eastern city of Severodonetsk, the Ukrainian official in charge of the region says.

Governor Sergiy Gaiday says that Ukrainian forces still retain some areas within the industrial city, which has been emptied of most of its pre-war population of 100,000, but that the situation is “extremely complicated”.

Capturing Severodonetsk would give Russia de-facto control over Lugansk, one of two eastern regions which Moscow has vowed to “liberate”.

A cargo ship bound for Russia has reportedly set sail from occupied Mariupol, less than two weeks after the last Ukrainian defenders of the strategic port city surrendered.

Russia last week said it had demined the port as a first step to resuming shipments from the port, a key exit point for Ukrainian grain.

Dozens of container ships are blocked in Ukrainian ports which have been blockaded by Russian vessels. Russia is in talks with Turkey about creating a secure corridor for shipping companies.

Russia’s largest bank Sberbank says it has not been affected by the EU’s sixth round of sanctions, which excluded the bank from the SWIFT financial messaging system, making it difficult for it to receive or make international payments.

“We are working as normal — the main restrictions are already in place,” the bank says, referring to earlier US and UK sanctions that have already isolated its financial system.

A 32-year-old French television journalist is killed while covering the evacuation of civilians near Severodonetsk for news channel BFM.

Frederic Leclerc-Imhoff is the eighth journalist killed while covering the war, according to a count by the Reporters without Borders NGO and AFP.

BFM says he was killed by shrapnel from the bombing of a humanitarian bus on which he was travelling with evacuees and that a French colleague of his was wounded.

Russia’s Gazprom cuts supplies to the Netherlands after Dutch energy firm GasTerra refuses to pay for the gas in rubles, a key demand of the Kremlin.

Gazprom has already cut off gas to Finland, Poland and Bulgaria over their refusal to pay for gas in rubles, which Moscow is pushing as a way to sidestep Western sanctions on its central bank.

Danish energy company Orsted warns Russia could cut gas supplies to Denmark after it also refused to pay in rubles.