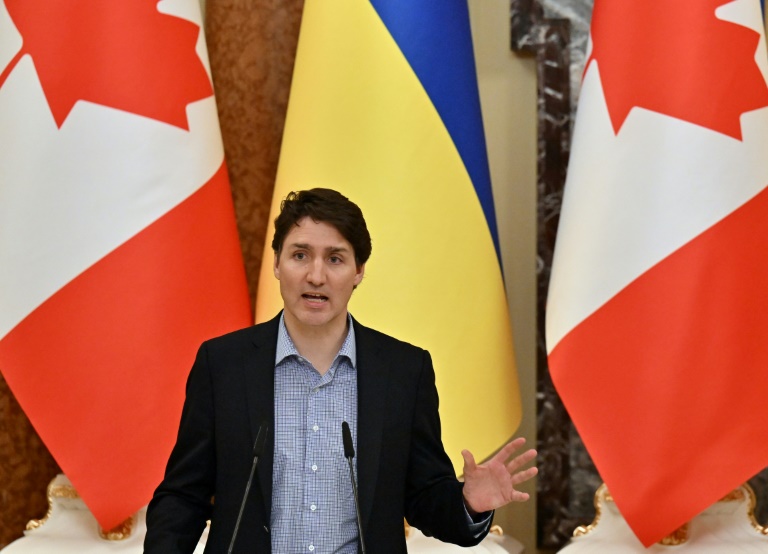 Prime Minister Justin Trudeau announced Monday a proposed freeze on handgun ownership in Canada that would effectively ban their importation and sale, following recent mass shootings in the United States.

The bill must still be passed by Parliament, with the ruling Liberals holding only a minority of seats.

“We’re introducing legislation to implement a national freeze on handgun ownership,” Trudeau told a news conference, joined by dozens of families and friends of victims of gun violence.

“What this means is that it will no longer be possible to buy, sell, transfer or import handguns anywhere in Canada,” he said. “In other words, we’re capping the market for handguns.”

But Trudeau acknowledged Monday that gun violence continues to rise.

The government statistical agency reported last week that firearms-related violent crimes account for less than three percent of all violent crimes in Canada.

But since 2009 the per capita rate of guns being pointed at someone has nearly tripled, while the rate at which a gun was fired with an intent to kill or wound is up five-fold.

Police often point to smuggling from the United States — which is reeling from recent shootings at a school in Texas and at a supermarket in New York state — as the main source of handguns.

Public Safety Minister Marco Mendicino estimated there are about one million handguns in this country — up significantly from a decade ago.

“People should be free to go to the supermarket, their school or their place of worship without fear,” Trudeau said.

“People should be free to go to the park or to a birthday party without worrying about what might happen from a stray bullet.

“Gun violence is a complex problem,” he said. “But at the end of the day, the math is really quite simple: the fewer the guns in our communities, the safer everyone will be.”

New Democratic public safety critic, MP Alistair MacGregor, indicated his party would be willing to work with the Liberals to get the proposed law passed.

“We want to believe that today’s announcement on gun violence is an urgent priority and not just another political stunt from this government, but there is a pattern of behavior from the Liberals to only use gun violence as a means to score political points,” he said in a statement.

But many in the Conservative Party criticized the proposal as unhelpful.

“The real problem in this country is not the law-abiding firearms owners, who are heavily regulated, heavily licensed,” John Brassard, minority leader in the House of Commons, told the CBC.

“The real problem in this country has to do with gangs and criminals who are importing firearms, mostly from the United States, using illegal guns on our streets,” he said.

“Today’s announcement fails to focus on the root cause of gun violence in our cities: illegal guns smuggled into Canada by criminal gangs,” she tweeted.

The proposed law would also strip anyone involved in domestic violence or stalking of their firearms license, and take away guns from those deemed to be a risk to themselves or others, as well as strengthen border security and criminal penalties for gun trafficking.

It would also ban long-gun magazines capable of holding more than five bullets.

Canada’s Coalition for Gun Control, founded after 14 women were killed at a university in Montreal in 1989, praised Trudeau’s proposal.

“The proposed phasing out of private handgun ownership, is a major step forward and shows that the Government has been listening to the voices of victims,” organization president Wendy Cukier said in a statement.