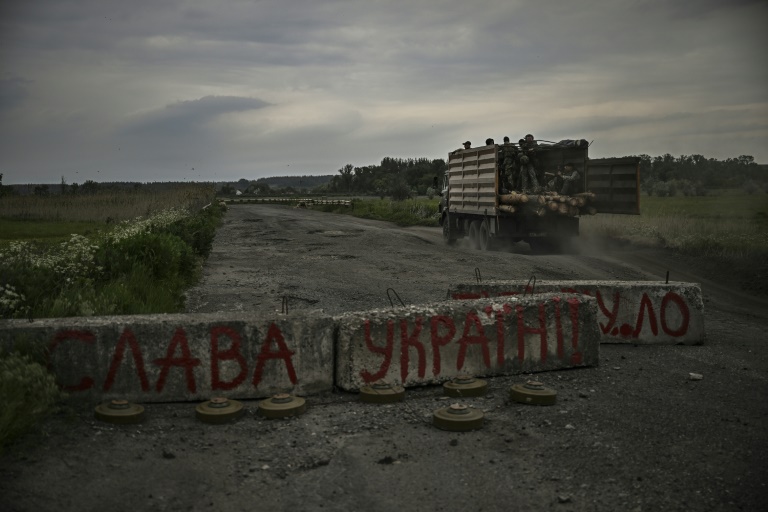 A retired doctor pulling weeds from her flower garden in the heart of the Ukraine war zone had a maxim: men with guns come and go but life is never-ending.

Valentyna Prys’s life was filled with the types of painful contradictions shared by scores of other families in the fourth month of Russia’s invasion.

She loved Russia but no longer spoke to her Moscow relatives because they refused to believe the Kremlin could unleash the type of devastation that had ruined her town of Barvinkove.

The 71-year-old’s remaining neighbours — too poor or sick to flee — came from older generations that had halcyon memories of an orderly Soviet life.

The ghostly streets outside her front door were patrolled by tense Ukrainian soldiers who were fighting for their country’s survival in a region where the locals’ sympathies were split.

And the town itself was almost equidistant from one front, where Ukraine’s outgunned forces were pushing back the Russians near Kharkiv, and another, where they were retreating near Severodonetsk.

“I am trying to keep going,” Prys said after looking up with a smile from her weedy follower arrangement.

“For us, this war is temporary, but life is eternal.”

Russia’s invasion has turned into a war of attrition that has seen very little ground change hands — but a whole lot of it get destroyed.

Ukraine’s resolve and breakdowns in Russian logistics and morale have forced the Kremlin to focus almost all its energy on the capture of a ruined industrial corner of the east.

The Russians are slowly fighting their way through the smouldering remains of Severodonetsk after pounding its highrises and factories from all sides with artillery.

The pulverised chemical production centre is still believed to hold thousands of trapped families in basements with almost no access to medicine or water.

Military analysts believe the Russians will try to surrounded it and then use the two cities as an outpost from which to link their forces with those fighting further west.

But analysts have seen only marginal success in Russia’s new objective — greatly scaled back from the first weeks of war — of capturing Ukraine’s eastern administrative centre in Kramatorsk.

“Russian troops have been unable to make progress on any other axes for weeks and have largely not even tried to do so,” analysts from the US-based Institute for the Study of War wrote one of their closely-followed daily dispatches.

Frontline Ukrainian soldiers getting pummelled by rocket and artillery fire seem to share one dream: precision-guided weapons that could hit the Russians from long range.

“If you know you have a heavy weapon behind you, everyone’s spirits rise,” said one soldier who uses the nom de guerre Luzhniy.

“Otherwise, you just sit in the trench staring at the horizon.”

Washington had shied away from such advanced weapon deliveries because of the implied risk of nuclear-armed Russia’s response.

But US media suggest some shipments may be approved as early as this week thanks to a growing sense that Ukraine could — with a little extra help — beat back the Russians.

Ukrainian troops say such systems usually require a month’s training to use effectively in the field.

“Look, at this stage, our guys are ready to fire anything after playing with it for a couple of weeks,” said another soldier with the nom de guerre Moder.

Analysts think Russia’s halting gains and the eventual supply of bigger Western guns might mean time is on Ukraine’s side.

“But it is critical that Ukraine doesn’t allow its forces to get encircled.”

Yevgen Onyshchenko certainly does not feel like time is on his side.

The 42-year-old plumber stared out the ground floor window of his powerless Lysychansk apartment and wondered who controlled the surrounding streets.

“We do not know anything,” he said before gratefully accepting a bowl of soup prepared by his neighbour over an open fire in the building’s backyard.

The shells flying in at his city from Russian positions around Severodonetsk were getting more frequent and a sense of peril was growing by the day.

Raging battles across the main road leading to other parts of government-controlled Ukraine meant that Onyshchenko’s older neighbours had no access to life-saving heart medication.

“We see some cars driving around with Ukrainian flags so we figure that means we are still part of Ukraine,” said the Lysychansk plumber.

“But otherwise, we are in the dark.”