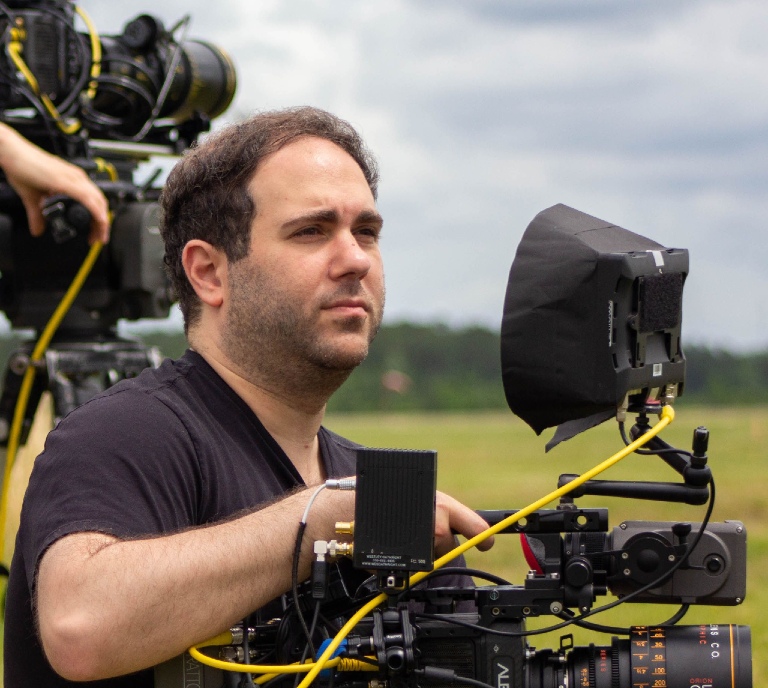 Director Michael B. Chait chatted about his new film “Wolf Hound” and working with the male lead actors James Maslow and Trevor Donovan.

The movie is in Select Theaters, on Digital, and On Demand on Friday, June 3, 2022, and it will be released via Lionsgate/Grindstone. “This is the exact movie that I always dreamed about making, and I am very blessed that we were able to do that,” he said.

“Wolf Hound” features action sequences using vintage aircraft, this thrilling WWII epic shows how one man’s courage can change the world. On a recon mission over Germany, pilot David Holden (James Maslow) is shot down along with a B-17 bomber.

He lands near an airfield, where he learns the Germans are loading the U.S.-marked aircraft with a city-destroying super bomb that could help the Axis win the war. Now, Holden must evade search patrols and a vengeful Nazi soldier to rescue the captured crew and stop the doomsday plot.

Even more impressive about this movie is that there was no CGI, (just some practical special effects) and they had access to some really rare World War II planes that have already gotten the attention of the aviation community. “Wolf Hound” is more of an action thriller WWII film with visually striking cinematography.

For Michael B. Chait, “Wolf Hound” was a labor of love. “Honestly, I was overjoyed with this whole experience,” he said. “I’ve dreamed since I was 12 years old about making a feature film.”

“Just getting to make an actual movie, especially with the World War II aircraft and all of these resources, as well as production value, and getting to do it with very dear friends of mine was really great,” he added.

Chait had great words about working with James Maslow and Trevor Donovan. “James Maslow is the best,” he exclaimed. “I’ve become good friends with him in a short period of time. He really jumped in very passionately on this project, and we got to know each other on a personal level. James was passionate, hungry, and he was always intense and there in every scene. James also did his own stunts. He is amazing to work with.”

“Trevor Donovan is one of the nicest actors I’ve ever worked with in my life,” Chait said. “Trevor is exactly who you think he is. He is extremely humble and very laid-back. The character he plays in ‘Wolf Hound’ is the polar opposite of him. Trevor loved the challenge of playing this evil Nazi and it really pushed his range and his acting ability. I think Trevor did a great job.”

On being an actor in the digital age, Chait said, “I’ve had mixed feelings about it. I love the fact that everybody can see the movie instantly these days. Honestly, it’s a blessing and a curse. Everyone can see your movie so much quicker and you have so much reach but it becomes a little less special at the same time because it is always available.”

“I am very blessed that the movie is opening in select theaters this week as well as streaming platforms, so it’s the best of both worlds,” he added.

Advice for hopefuls in filmmaking

For young and aspiring filmmakers, Chait said, “Honestly, if you are passionate and you know that you want it and you love it, then don’t let anybody discourage you no matter what, and sink your teeth into your goal.”

“We worked literally for about a decade to get ‘Wolf Hound’ made, and I wouldn’t trade that for anything because that made it even sweeter. Just keeping your passion alive and not letting go is the best advice that I could give. Make what you want, and something that is in your heart, and that will be the best product that you as a filmmaker can make because it really comes from you,” he added.

The trailer for “Wolf Hound,” starring James Maslow and Trevor Donovan, may be seen below.

On the title of the current chapter of his life, he responded, “Chapter 2.” “I finally get to make movies,” he said with a sweet laugh. “The first chapter was me really wanting to make movies, and now, I am making them.”

If he were to have any superpower, he revealed that it would be “teleportation.”

Regarding his definition of success, Chait said, “For me, personally, success means being able to do what I love, which is filming, directing and making movies, and being able to keep doing that for the rest of my life.”

“I never plan to retire like Clint Eastwood. His idea is exactly my idea. I want to make movies forever, that’s my definition of success,” he explained.

Chait concluded about “Wolf Hound,” “I would remind the viewers that almost everything they see is 100 percent real: real planes in the air, no CGI, though the special effects assisted. That was something we really strived for. I am proud that almost everything you see is the real deal. Outside of that, we put a lot of blood, sweat, tears, and passion into it. I really hope that people sit back and relax and go ‘wow’ for two hours watching that movie and having a great time.”