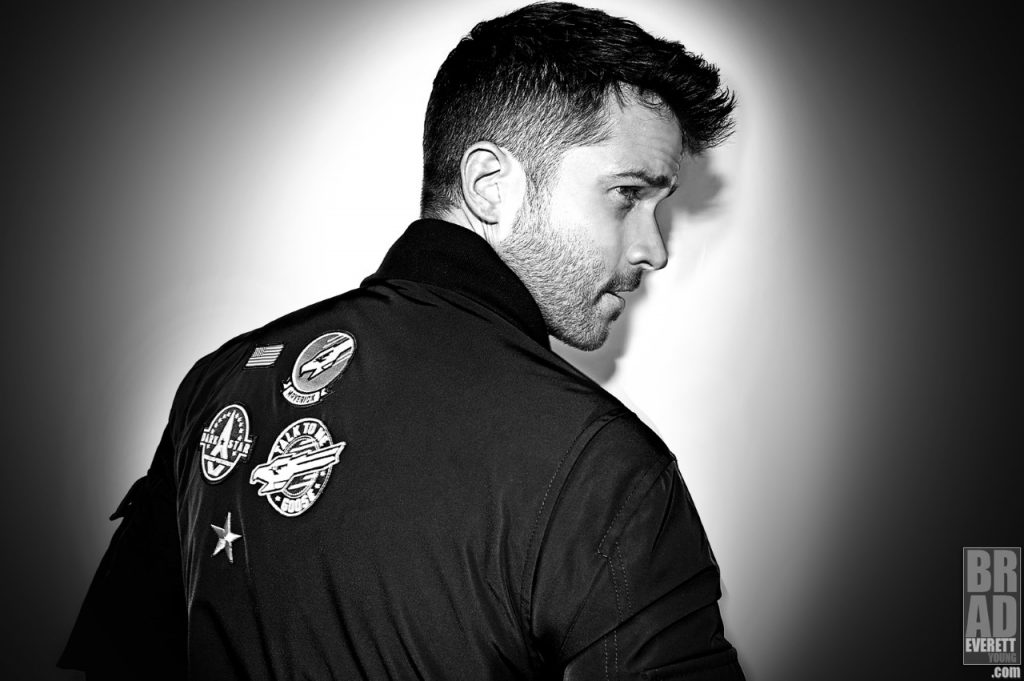 “Being part of a film of this magnitude was an absolutely exhilarating and surreal experience from start to finish,” he exclaimed. “Everyone involved in the creation of Maverick – from writers to cast to the crew – was spectacular and at the top of their game.”

“So I was honored to step into this arena and see how experts in this field operate and work together to create a masterpiece like this film. It was not only educational but humbling and inspiring as well,” he said.

“Watching Tom Cruise and my fellow castmates and seeing how they approach their craft, then being able to absorb how they work was one of the most valuable experiences I’ve had in my career,” he said.

He was drawn to playing Lieutenant Neil “Omaha” Vikander for several reasons. “What I enjoyed most about playing Omaha was getting to see and understand the level of dedication and sacrifice that pilots and other men and women of our military give in order to serve our nation,” he explained.

“We got to spend a lot of time around the men and women of the Navy and hear first-hand their stories and what motivates them. It was an honor to portray them, what they stand for, and how they serve in real life,” he said.

Regarding his daily motivations as an actor, he said, “I’ve always had an underlying and unwavering knowledge that this was the path I was meant to be on. Even during moments of doubting whether it will work out or if I should give up, I’ve never been able to entertain the idea of doing anything else with my life.”

“I believe life is about being of service to others. No matter what your profession in life, if you approach it with an attitude of service and bringing light and positivity to the world, then you’re already a success,” he said.

“So as an actor, my hope is that with each audition, each role, and each opportunity that presents itself, I am able to be of service to the story that is being told. Ideally, that story moves an audience in one way or another.  Whether it’s simply to make someone laugh or if it’s a deep, heavy message, if I have given my all in the attempt to bring the message to life, then I have done my job and that’s what it’s all about,” he elaborated.

On being an actor in the digital age, he said, “I feel incredibly lucky to be an actor in the digital age. All of the streaming services and technology mean that it’s easier than at any point in history for a person to tell a story and reach a larger audience. There are countless examples of stars who got their start by just getting a camera and making content that they put up on YouTube or another streaming service. You don’t have to wait to get someone else’s blessing to make your vision a reality.”

“The tools are readily available if you want to go for it. And the best art will eventually be recognized by the public and rise to the top. I’m often overwhelmed by the enormity of offerings of content to watch nowadays just on Netflix, not to mention the other handful of major player streaming options. But even with thousands of choices at our fingertips, the best will always find its way to the masses,” he elaborated.

For young and aspiring actors, he said, “Be patient and don’t give up!. I was once told by a very successful working actor that the people who don’t make it are the ones who quit. If you know that this is what you want to do, and there is absolutely nothing else, no plan B, then you will make it happen.”

“Now it very likely won’t happen according to your timetable, it might be 20 years before you book something, so you have to be ready for the long haul and be mentally prepared for years and years of rejection and frustration,” he said.

“You have to be patient,” he underscored. “And trust me this is something I think about every day. It is by no means easy or comfortable. But if you continue to work on your craft, improve and grow as an actor, seek out real-life experiences, and develop who you are as an individual human being…then the rest will take care of itself.”

Schumacher had great words about working with photographer Brad Everett Young and being a part of his Dream Loud campaign, which helps to preserve art and music programs in school.

“It’s an incredible honor to work with Brad and be a part of his Dream Loud campaign. Brad is a phenomenal example of someone who uses his talents and gifts as an artist and creator to be of service to others and raise awareness of the preservation of art and music programs in schools,” he said.

“We’re obviously in a difficult time in the world financially, and so often the focus on the arts is lost in our schools, but when kids miss out on the opportunity to express their creativity and find their voice, then we lose so much collectively as human beings,” he said.

“Dream Loud calls attention to this and the importance of why we can’t lose sight of the power art has in our society – whether it is painting, film, music, or any other artistic expression. It is what makes the human experience entirely unique and reminds us so much of what matters in life,” he added.

He continued, “There will always be someone who has more than you. So how do you not get sucked into this seemingly endless black hole of comparison? You have to change your metric of how you measure success. If you measure it in cash, prizes, and social status, you will always lose.”

“If you can stop looking at that, then you can measure success instead in things like how valuable I am as a son, or how giving I am in my relationship with a partner or significant other. What is my value as a friend to the people around me? Do I give 100 percent at work? Am I of service to my community and those in my life? Do I do more good than harm in the world?” he said.

“If you judge your life based on these questions and you look honestly at where you can improve in any area and you work on making those adjustments, then you are a success. And that is how I measure my value and worth,” he added.

Schumacher concluded about “Top Gun: Maverick,” “It is so much more than a visually stunning action packed film. No question you are going to witness the most spectacular and stunning aviation sequences ever captured on film and walk away with your jaw on the floor.”

“Maverick has something that so many large action-packed blockbusters lack these days, and that is heart. It’s a story of redemption, honor, and belief. You will laugh, cry, and hold on to your seat when you watch what ‘Top Gun: Maverick’ has to offer,” he concluded.

To learn more about actor Jack Schumacher, check out his IMDb page, and follow him on Instagram.