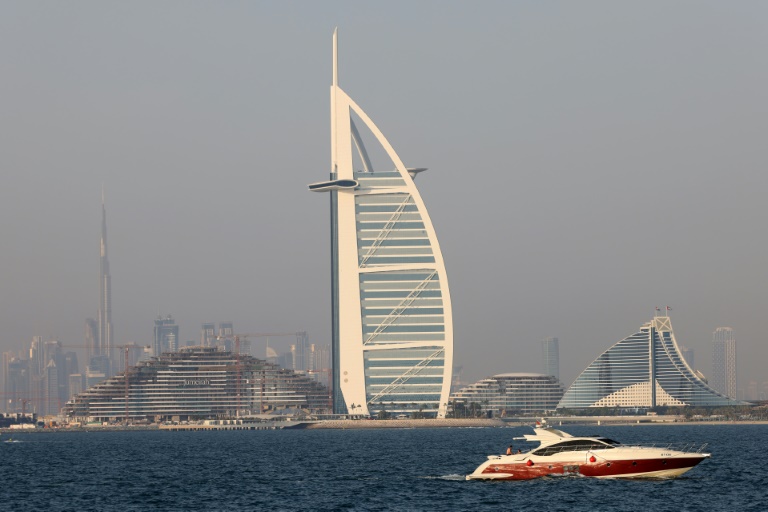 A yacht sails before the skyline of the Emirate of Dubai on April 21, 2022
– Copyright AFP/File Daniel ROLAND

Israel signed a free trade deal with the United Arab Emirates on Tuesday, its first with an Arab country, building on their US-brokered normalisation of relations in 2020.

Israel’s ambassador to the oil-rich UAE, Amir Hayek, tweeted “mabruk” — congratulations in Arabic — with a photo of Emirati and Israeli officials holding documents at a signing ceremony in Dubai.

The Emirati envoy to Israel, Mohamed Al Khaja, hailed as an “unprecedented achievement” the deal that, according to the Israeli side, scraps customs duties on 96 percent of all products traded.

“Businesses in both countries will benefit from faster access to markets and lower tariffs as our nations work together to increase trade, create jobs, promote new skills and deepen cooperation,” Khaja tweeted.

The 2020 normalisation deal was part of the US-brokered Abraham Accords that also saw Israel establish diplomatic ties with Bahrain and Morocco.

Two-way trade between Israel and the UAE last year totalled some $900 million dollars, according to Israeli figures.

“UAE-Israel trade will exceed $2 billion in 2022, rising to around $5 billion in five years, bolstered by collaboration in renewables, consumer goods, tourism and the life sciences sectors,” he said in a statement.

“Dubai is fast becoming a hub for Israeli companies that look to South Asia, the Middle East and the Far East as markets for their goods and services.”

Nearly 1,000 Israeli companies will be working in and through the UAE by year’s end, he said.

The UAE was the first Gulf country to normalise ties with Israel and only the third Arab nation to do so after Egypt and Jordan.

Talks for a free trade agreement began in November and concluded after four rounds of negotiations.

The latest was held in March in Egypt between Israeli Prime Minister Naftali Bennett and Sheikh Mohammed bin Zayed Al-Nahyan, UAE’s long-time de facto ruler who became president this month after the death of his ailing half-brother Sheikh Khalifa.

Israel had in March hosted a meeting of the top diplomats from the United States, UAE, Bahrain and Morocco.

Sudan in 2020 also agreed to normalise ties with Israel, but the strife-torn northeast African country has yet to finalise a deal.

Israel has already struck free trade agreements with other countries and blocs, including the United States, European Union, Canada and Mexico.

In February, Israel signed a trade deal with Rabat to designate special industrial zones in Morocco.

The Abraham Accords broke with long-standing pan-Arab policy to isolate Israel until it withdraws from the occupied territories and accepts Palestinian statehood.

Palestinians condemned the agreements struck under then US president Donald Trump, and the conflict continues to inflame tensions, including between Israel and the UAE.

Israel annexed east Jerusalem in 1980, a move never recognised by the international community.

The UAE on Monday “strongly condemned” what it called Israel’s “storming” of Jerusalem’s Al Aqsa mosque compound, one of Islam’s holiest sites.

The UAE “reiterated its firm position on the need to provide full protection for Al Aqsa Mosque and halt serious and provocative violations taking place there”, reported the official WAM news agency.