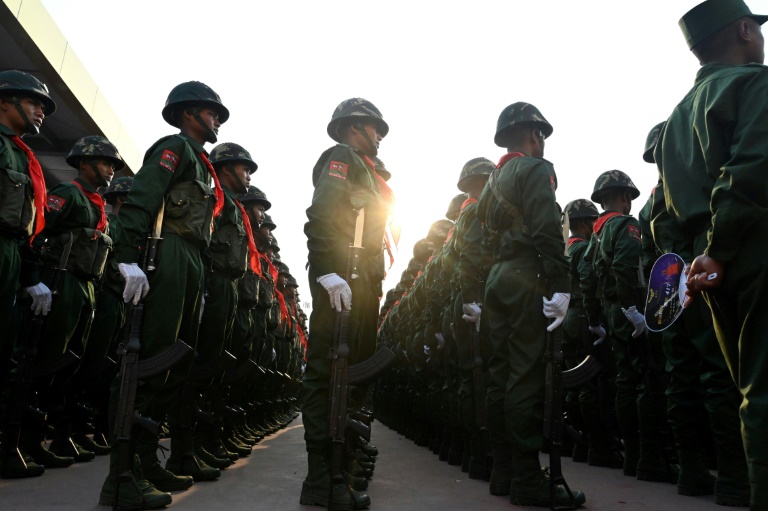 With a standing force of around 25,000, the United Wa State Army is one of the world’s largest non-state militaries – Copyright AFP/File Ye Aung THU

A powerful Myanmar ethnic rebel group with close ties to China called on Tuesday for the junta to engage in dialogue with anti-coup fighters to end 15 months of bloodshed.

With a standing force of around 25,000, the United Wa State Army is one of the world’s largest non-state militaries, manufacturing its own guns and conscripting a member from each household in areas under its control.

But the UWSA largely sticks to its autonomous enclave on Myanmar’s northern border with China, and has so far had little involvement in the fighting sparked by the toppling of Aung San Suu Kyi’s government by the military last year.

The UWSA made an “appeal to all parties in the conflict for resolving it by negotiation as soon as possible”, it said in a statement following talks with junta officials in the capital Naypyidaw.

Internal conflicts in the borderlands that have plagued Myanmar since independence from Britain “have proved that any fundamental problems cannot be solved by military force”, it said.

It added the UWSA would remain outside the conflict between the junta and its opponents, which has plunged the country into turmoil and displaced hundreds of thousands of people.

Myanmar has about 20 ethnic rebel armies — many of which control swathes of remote border territory — that have fought each other and the military for decades over the drug trade, natural resources and autonomy.

Some have condemned the ouster of Suu Kyi’s government, and offered shelter and weapons training to the “People’s Defence Forces” (PDF) that sprung up after the coup.

Analysts say the PDFs have surprised junta forces with their effectiveness.

Wa forces dwarf the collage of other ethnic rebel groups, posing a deterrent to the military and providing Beijing with a useful bridgehead into its resource-rich neighbour.

China remains a major ally of the Myanmar junta and has refused to label the military’s power grab a coup.

In April, Beijing said it would help safeguard Myanmar’s sovereignty, independence and territorial integrity “no matter how the situation changes”.