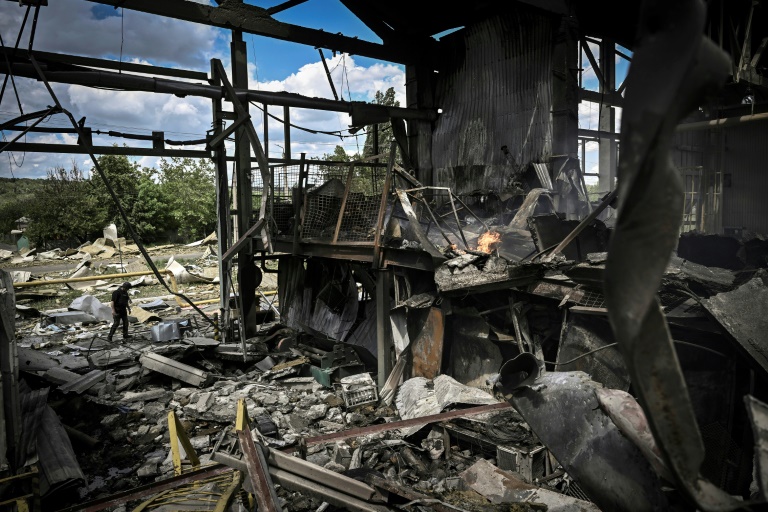 Russian forces advance closer to the centre of the eastern Ukrainian city of Severodonetsk, which has been under bombardment for weeks in the battle for Ukraine’s industrial heartland, the Donbas.

“The Russians are advancing into the middle of Severodonetsk. The fighting continues. The situation is very difficult,” Luhansk governor Sergiy Gaiday says on Telegram.

Severodonetsk is the easternmost city still in Ukrainian hands. Capturing it would give Russia de-facto control over Luhansk, one of two eastern regions that make up the coveted Donbas.

Gaiday says the city’s critical infrastructure has been “destroyed” and 60 percent of its housing is damaged beyond repair.

Ukrainian President Volodymyr Zelensky leaves the Kyiv region for the first time since the invasion started to visit the northeastern city of Kharkiv, where Ukrainian troops beat Russian forces into retreat in recent weeks.

Zelensky’s office posts a video of him wearing a bulletproof vest and being shown heavily destroyed buildings in Ukraine’s second-biggest city, which came under relentless attack for nearly three months.

He sacks Kharkiv’s security chief, “for not working to defend the city from the first days of the full-scale war but thinking only of himself”.

Ukraine’s Kalush Orchestra, which won the Eurovision song contest this year, auctions off its trophy on Facebook to raise funds for the Ukrainian army.

The trophy — a large crystal microphone with the song contest’s logo — nets $900,000 (836,000 euros) after a bidding war won by Ukrainian bitcoin company WhiteBIT

“You guys are amazing!” Kalush Orchestra says on Facebook, announcing the winner.

Ukrainian forces counterattack in the south, claiming to have pushed back Russian troops in Kherson, the only region fully controlled by Russian forces.

Kherson, which borders Crimea, was taken by Russian forces in March and Moscow-backed officials in the region have recently pushed for its annexation.

French Foreign Minister Catherine Colonna visits Kyiv for talks with Zelensky, the first visit by a French minister to Ukraine since the invasion.

Paris says her visit aims to show solidarity with Ukraine, “from a humanitarian and financial point of view as well as in terms of supplying defence equipment”.

Zelensky has at time been critical of French President Emmanuel Macron, accusing him of pressuring Ukraine to offer territorial concessions to Russia in return for peace, claims France rejects.

Russian Foreign Minister Sergei Lavrov denies speculation that President Vladimir Putin is ill, saying there are no signs pointing to any ailment.

Putin’s health and private life are taboo subjects in Russia and are almost never discussed in public.

Answering a question from France’s broadcaster TF1, Russia’s top diplomat says: “I don’t think that sane people can see in this person signs of some kind of illness or ailment,” adding that Putin appears in public “every day”.

Germany’s government and conservative opposition agree on an amendment to the constitution to allow the creation of a special 100-billion-euro fund to modernise the army in the face of the Russian threat.

The deal will allow Berlin to achieve NATO’s target of spending two percent of GDP on defence “on average over several years”, according to the text of the agreement obtained by AFP.