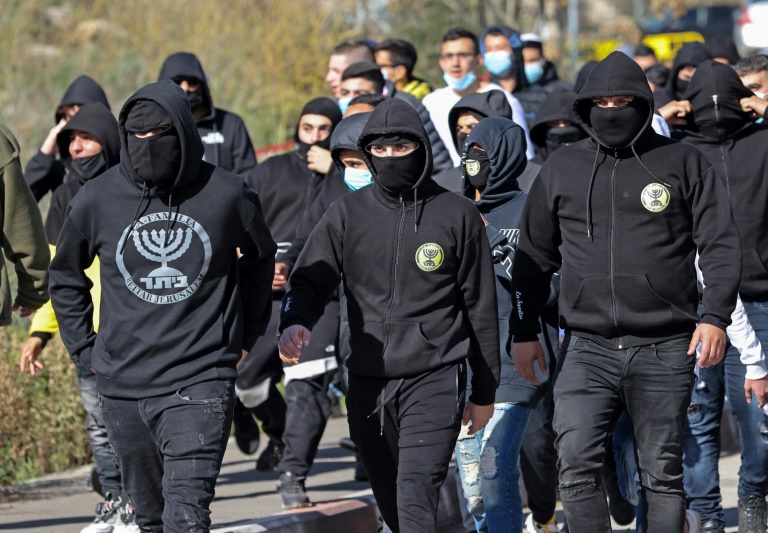 Members of “La Familia”, a far-right fan group of Israel’s Beitar Jerusalem football club, arrive on December 11, 2020 to confront supporters of the purchase, by a member of Abu Dhabi’s royal family, of half ownership in the club – Copyright AFP ARIS MESSINIS

Israel should consider placing on its terrorism list two right-wing extremist groups accused of violence towards Palestinians and who called for the death of Arabs, Defence Minister Benny Gantz said Monday.

“I believe it is time to examine defining groups like La Familia and Lehava as terror groups, and I know the issue is being presented to security forces,” Gantz said during a faction meeting of his Blue and White party.

Some marchers chanted “death to Arabs”, as a number of Palestinians hurled projectiles from the rooftops.

Foreign Minister Yair Lapid described Lehava and La Familia as a “disgrace” who weren’t “worthy of holding the Israeli flag”.

La Familia is a group of fans of the Beitar Jerusalem football club, notorious for their anti-Arab racism and violence.

Lehava is an extremist right-wing group that fights against fraternisation between Jews and non-Jews which could lead to intermarriage. It is affiliated with the teachings of the late Rabbi Meir Kahana, whose Kach group is outlawed in Israel.

To designate an organisation as a terrorist group, one of Israel’s security organisations — the Shin Bet internal security agency, police, army or Mossad — must issue a request to the defence ministry and receive the consent of the attorney general.

Following the defence minister’s approval, the group will receive a three-month temporary designation, during which it can appeal the decision to the ministry as well as a special judiciary panel.

If no appeal overturns the decision, the group will then be formally declared a terrorist organisation.

Israeli officials have from time to time previously raised the issue of designating La Familia and Lehava as terrorist groups, but have never gone through with the process.

La Familia brushed aside the latest wave of condemnation and attention as an attempt to garner political support.

“Time and again political groups or members of Knesset try to ride on the organisation’s back to try get votes and take down the group with incidents that never happened,” they wrote on their official Facebook page.

“La Familia is a football organisation only, and as regular civilians we have the right to march in Jerusalem,” they said.

Lehava head Benzi Gopstein lashed out against Gantz who hosted Palestinian president Mahmud Abbas at his home late last year, “but doesn’t do a thing against the Arabs who incite day after day on the Temple Mount,” the holiest site in Judaism which is also Islam’s third-holiest site, Al-Aqsa mosque compound in east Jerusalem.

“We’ve been through” hardships, Gopstein said on his Telegram channel, and “we’ll get through Gantz too.”