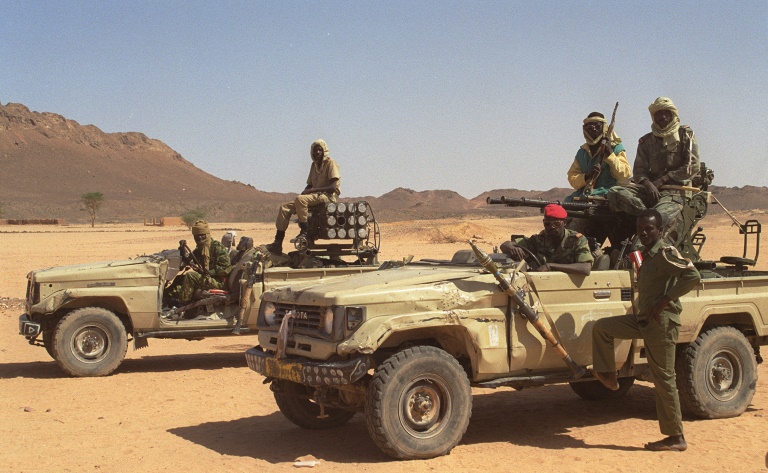 The remote Tibesti Mountains have a long and troubled history. Pictured: Troops on patrol in 1999 after an insurgency – Copyright AFP/File Peter PARKS

Violence broke out on May 23 at Kouri Bougoudi near the Libyan border, sparked by a “mundane dispute between two people which degenerated,” he said, adding that the toll was “around 100 dead and at least 40 wounded.”

The clashes occurred in the Tibesti Mountains, a rugged and lawless region in the central Sahara some 1,000 kilometres (600 miles) from the capital N’Djamena.

The discovery of gold there 10 years ago sparked a rush of miners from across Chad and neighbouring countries, and tensions often run high.

The latest clashes were between Mauritanians and Libyans, Yaya Brahim said.

He spoke to AFP by phone from the area, where he said he was with a large military contingent sent to help restore order.

“This isn’t the first time that there’s been violence among gold miners in the region, and we have decided to suspend all gold mining at Kouri until further notice,” he said, adding that “the great majority (of mines in the area) are illegal.”

The incident was first announced last Wednesday, when Communications Minister Abderaman Koulamallah said in a statement there had been “loss of human life and several wounded,” but gave no further details.

The same day, the head of Chad’s National Human Rights Commission, Mahamat Nour Ibedou, told AFP that after the fighting broke out, “the government sent in a force to intervene, which fired on people”.

“According to our information, there are at least 200 dead,” he said, adding that he had no evidence to support this figure.

Succes Masra, who heads an opposition party called The Transformers, and Chad’s main armed rebel movement, the Front for Change and Concord in Chad (FACT), also gave a toll of some 200 dead.

But Yaya Brahim denied this figure and said the authorities were not to blame.

“The defence and security forces absolutely did not open fire, and there were not 200 deaths,” he said.

On Monday, another rebel group in the region, the Military Command Council for the Salvation of the Republic (CCMSR), said in a statement there had been “carnage,” which had unfolded “under the complicit gaze of the security forces.”

The Tibesti region is notorious for ethnic troubles and for fostering revolts that have marked Chad’s history since the vast central West African country gained independence from France in 1960.

In January 2019, several dozen people died in Kouri when fighting erupted between Libyan Arabs and people from the eastern Chadian region of Ouaddai.

Koulamallah, in comments to AFP last Wednesday, described the gold-mining area as a “hostile zone, almost lawless, it’s the Far West. They all go there because there’s gold, so there’s conflict.”

The impoverished Sahel state last year lost its 30-year ruler, Idriss Deby Itno, who was killed during an operation against rebels.

His place was taken by his son, General Mahamat Idriss Deby Itno, at the head of a 15-member military junta.