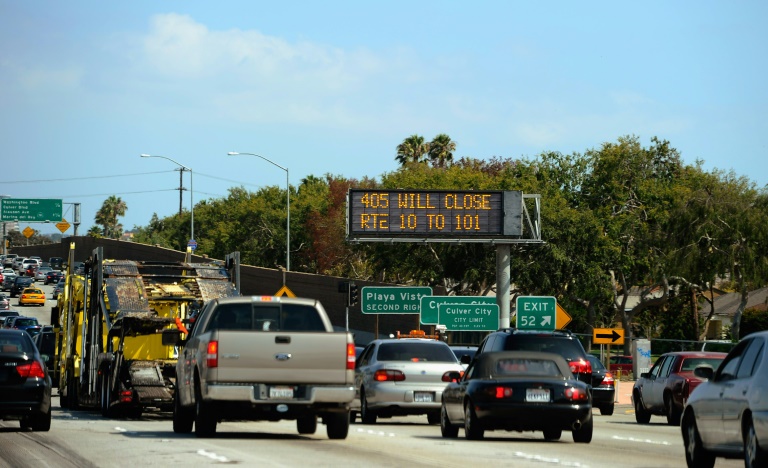 The company ITC says traffic jams, like this one in Los Angeles, are a global scourge that leave the average driver stuck in traffic three days a year – Copyright GETTY IMAGES NORTH AMERICA/AFP/File KEVORK DJANSEZIAN

Israel’s traffic congestion ranks near the worst among developed economies but an algorithm can help, says one of the country’s IT firms engaged in the auto and mobility sector.

ITC, or Intelligent Traffic Control, was one of the artificial intelligence players at Tel Aviv’s recent EcoMotion showcase where high-tech and AI firms hope to make transport more efficient and cleaner.

Its AI software collects real-time data from road cameras and then sends instructions to manipulate traffic lights based on vehicle flows.

“ITC managed to prove mathematically that many traffic jams can be prevented –- if you intervene early enough,” said its co-founder and chief technology officer Dvir Kenig, citing a 30 percent drop in traffic at the two junctions using their system.

The problem is acute in Israel where, the Organisation for Economic Cooperation and Development says, “transportation infrastructure lags significantly behind” most member countries and “road congestion is one of the worst in the OECD”.

EcoMotion’s founder Meir Arnon told AFP that surging global interest in smart mobility had made Israel an auto industry player, even though it doesn’t manufacture any cars.

“Cars changed,” said the industrialist turned investor. “Cars were metal and wheels and a radio. Today these things don’t matter, they’re all mass produced by the same companies for everyone.

“What differentiates car manufacturers today is the driving experience… the vehicle’s ability to adapt itself to the driver,” he said.

With over 600 start-ups in the field — “second only to Silicon Valley” — Israel has become a “centre of mobility,” Arnon said, noting that 35 global auto companies have operations in the country, including General Motors.

“The future of vehicles lies outside vehicles — in the cloud, our phones, in the cars to some extent, and all these elements create an open platform,” said Gil Golan, head of GM’s local technical centre.

“This open platform is a place for innovation and creativity, which Israelis are good at.”

Also at EcoMotion was Rider Dome, whose cameras mounted on the front and back of motorcycles use artificial intelligence to warn riders of nearby dangers.

“A driving assistant that has become a standard in nearly every car does not exist in motorcycles,” chief executive Yoav Elgrichi said. “That’s why we decided to found Rider Dome.”

But some observers warn that Israel’s technology sector, including smart mobility, could run out of steam.

The Israel Innovation Authority says the tech sector, which accounts for half the country’s exports and one in 10 jobs, is “maturing” and the number of new startups is on the decline.

Israel needs more engineers, argues Lisya Bahar Manoah, a partner at Catalyst Investments, if it wants to keep pace with the growing mobility sector that is expected to “double in size” globally over the coming years.

“The way that we can overcome the problem is — like in Europe, especially in Germany and Austria -– they are creating professional schools,” she said.

“Israel needs to stop and think now about a way to create more engineers in order to support the start-up system. We need to adjust our education system accordingly.”