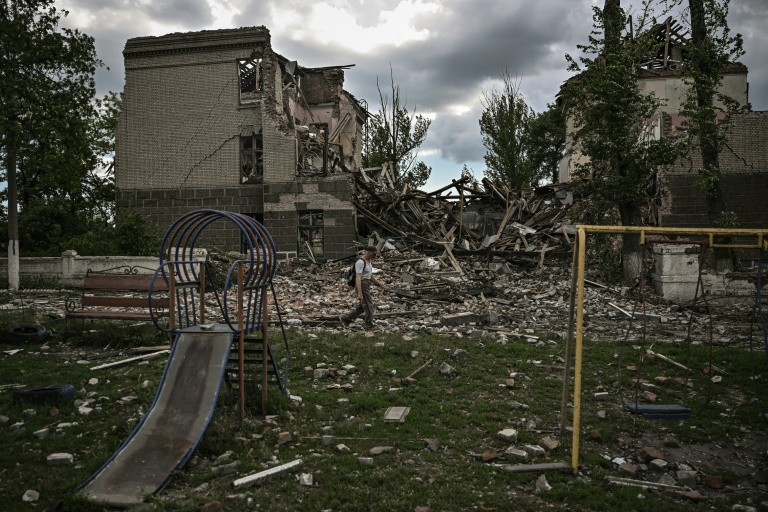 The Ukrainian farmer thought it was fear that made her neighbours age so much in the week since she saw them come out for market day on the eastern front.

The Russians had pushed a lot closer to her town of Soledar since Tetyana Barshchevska last set out her stall on the opposite side of the street from an already-destroyed grocery store.

The local salt mine now had a chunk of it smashed in by a missile and the main road where the buses once stopped was being torn apart by artillery fire.

But Barshchevska was mostly worried about what the fourth month of Russia’s invasion might do to her pigs and cows.

“I have invested everything in them. All my labour has been poured into the farm,” the 47-year-old said from behind a foldout table laden with slabs of meat and jars of sour cream.

Barshchevska looked closely at her friends and then back down at her table full of meat.

“It really struck me today how much everyone has aged in the past week,” she said during an afternoon lull in battles on three sides of her town.

“It is from fear. You can see it in their eyes. Their eyes are older.”

A deep new trench south of Soledar cuts to the core of locals’ concerns.

The Russians have crept up to Ukraine’s historic salt mining centre in a pincer movement that threatens to ensnare some of its toughest troops.

Soledar’s next-door neighbour Bakhmut has seen the Russians creep up to within three kilometres (two miles) of its eastern edge.

The road leading northwest is cut off by a Russian advance aimed at seizing the symbolicly important twin cities of Slovyansk and Kramatorsk — Ukraine’s centre for the eastern war zone.

But very few Ukrainian reinforcements are moving along any of these shelled highways.

The trenches to the south suggest that Ukraine is preparing to fall back to a new defensive position that leaves places such as Soledar behind.

The locals gathering at the town’s tiny market are sounding an increasingly fatalistic note.

“If it kills me, it kills me,” pensioner Volodymyr Selevyorstov said of the rocket and artillery fire that could smash into his stall at any moment.

“The other day my neighbour’s cow was killed by shrapnel and I had to pull it out of the yard so that it would not stink,” he recalled with a wry smile.

“I am waiting for my own two cows to get blown up today or perhaps tomorrow. That is how we live.”

Soledar’s bigger neighbour Bakhmut was once a frontline oasis that provided a home for Western relief groups.

Its roads are now littered with destroyed government buildings and warehouses that the Russians hit with daily rocket and missile fire.

Mobile Ukrainian units strike back from various positions in and around the largely emptied town.

They then try to move before the Russians have a chance to locate them and return fire.

This deadly cat-and-mouse game is wearing on the nerves of retired Bakhmut banker Valentyna Pavlenko.

The 69-year-old was tugging a two-wheel cart past the jagged remains of a school that residents say briefly housed a Ukrainian military unit.

“Where can I run? They are shooting everywhere you go, so where can you possibly run?” she asked in exasperation.

“If something explodes near me, my only wish is not to become disabled. I do not want to be bedridden. If it hits, I want it to be quick.”

The 42-year-old had lost his job months ago because of the fighting and was now helping clean potatoes at one of the Soledar market stalls.

He was as resigned to the possibility of instant death as most of his neighbours.

But he was was also extremely tired of being nagged by fear.

“Why even hide?” he asked while cleaning his potatoes. “If the shell comes flying in, it can hit anywhere, no matter where you hide.”

He sounded relieved to have something to occupy his hands and mind in wartime.

“You cower in a basement like a fool, with crazy thoughts running through your head,” he said.

“Out here, you can talk to people. We all know each other by now. So it makes it a little easier.”