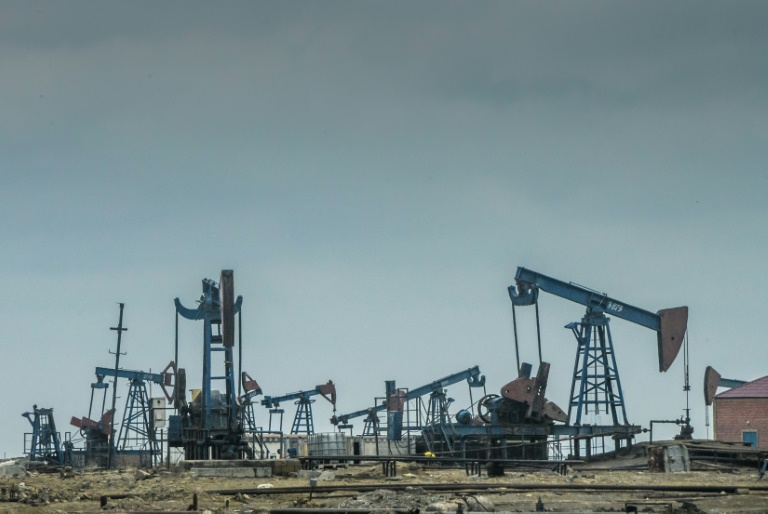 The latest round of proposed sanctions by the EU have been blocked by landlocked Hungary – Copyright AFP ISHARA S. KODIKARA

Ambassadors from the 27 European Union member states will on Sunday examine a compromise that could enable them to break the deadlock on a sixth round of economic sanctions against Russia, including a landmark halt to Russian oil imports, EU sources told AFP.

The latest round of proposed sanctions has been blocked by landlocked Hungary, which has no access to seafaring oil cargo ships and is dependent for 65 percent of its oil needs on Russian crude supplied via the Druzhba pipeline.

Budapest has rejected as inadequate a proposal to allow it two years longer than other EU states to wean itself off Russian oil.

It wants at least four years and at least 800 million euros ($860 million) in EU funds to adapt its refineries to process non-Russian crude and boost pipeline capacity to neighbouring Croatia.

The compromise solution put to national negotiators on Sunday consists in excluding the Druzhba pipeline from a future oil embargo and only imposing sanctions on oil shipped to the EU by tanker vessel, the sources said.

The Druzhba pipeline accounts for a third of all EU oil supplies from Russia. Maritime cargos account for the remaining two thirds.

The compromise was tabled by France, which currently holds the rotating EU presidency, and by the European Council, which represents the governments of the EU nations.

Its aim is to break a stalemate that has, since early May, prevented the EU from imposing a sixth round of sanctions on Moscow over its war in Ukraine.

It would end the purchases of Russian crude within six months and Russian petroleum products by the end of the year. It would also impose additional sanctions on Russian banks and expand the list of Russian individuals blacklisted by the bloc.

Another option under consideration would be to postpone the entire package of new sanctions until a solution can be found to provide Hungary with alternative oil supplies, the sources said.

The search for a compromise has accelerated in recent days to avoid divisions over Russia clouding the summit of EU heads of state and government due to take place in Brussels on Monday and Tuesday.

Ukrainian President Volodymyr Zelensky is to address the summit by video link when it begins on Monday afternoon.

If EU ambassadors succeed on Sunday in reaching a compromise on an oil embargo, it will still need to be approved by their governments before it can be put to the summit.