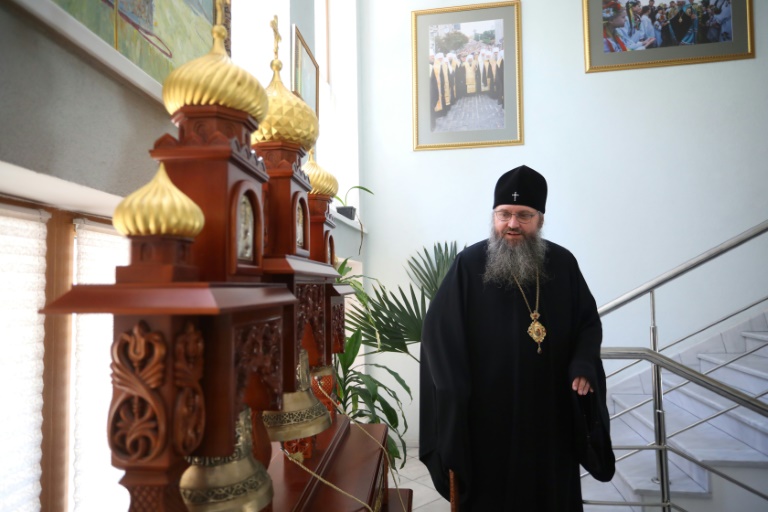 ‘The commandment ‘thou shall not kill’ has no other interpretations,’ said Archbishop Kliment – Copyright AFP Ishara S. KODIKARA

Ordinary members of the branch of Ukraine’s Orthodox church, until now loyal to Moscow, drove the decision to break ranks with the Russian leadership, its spokesman told AFP Saturday.

Archbishop Kliment said the church’s congregation felt it could no longer remain silent.

He was speaking inside Kyiv’s Pechersk Lavra monastery — one of the most ancient and holy sites in Ukraine — a day after the Ukrainian Orthodox Church of the Moscow patriarchy declared “full independence”.

The clerics condemned Russian Patriarch Kirill’s vocal support for the Kremlin’s invasion of Ukraine, in a historic move against Moscow’s spiritual authorities.

Bearded and black-robed, Kliment said his church “does not accept, condemns and completely dissociates itself from those statements about Russian aggression in Ukraine that came from the lips of Patriarch Kirill”.

Kirill is a staunch supporter of Russian President Vladimir Putin and has spoken out in support of Russia’s invasion of Ukraine several times.

For Kliment, the situation was clear. “The commandment ‘thou shall not kill’ has no other interpretations,” he said.

“It is difficult for me to (understand) the explanation or silence of the representatives of the Moscow patriarchate on the tragedy that is happening today,” he added, as tens of thousands are killed and millions displaced.

His wing of Ukraine’s church is one of the last links to Russia. it remained loyal despite a 2019 schism that saw the creation of a rival Kyiv patriarchy — a huge blow to Moscow.

Kliment acknowledged that his church had “always felt pressure from the state” to break from Moscow — and the authorities here have welcomed the decision of the Kyiv patriarchy.

But this time, he said, the appeals had come from their own worshippers.

“There was a need for this, a demand in church society.”

Ukrainian priests had tried to “reach the patriarch and those directly responsible for the Russian aggression” in Moscow before their decision, he said, but had received no response.

Kliment stressed that clerics from all over Ukraine — including territories controlled by separatists — took part in the council, priests from the war zone in the east joining online.

“The council was attended by representatives of almost all the dioceses, including those of the East”, he said. Their decision, he said, “will be relayed in (Moscow-annexed) Crimea and in the Donbas”.

Moscow patriarchy clerics play an important role in territories not under Kyiv’s control, he said, often acting as a “bridge” with Ukrainian authorities.

They have been involved in negotiating “the return of prisoners or their exchange and the delivery of humanitarian aid”, he said.

But this week’s decision will be testing for priests working in rebel areas, he added.

“This requires from these priests a certain courage and wisdom in order to preserve unity in the church and at the same time not to lose the flock in these areas.”

Archbishop Kliment played down hopes for broader unity inside Ukraine’s Orthodox circles, which was divided by the 2019 schism.

“This largely depends on them, because the position held by the representatives of the Orthodox Church in Ukraine is not constructive,” he said.

He accused them of “choosing the path of confrontation, seizing churches and discrediting our believers”.

This newly created Kyiv branch of the church now pledges allegiance to Istanbul-based Patriarch Bartholomew — something the Moscow branch had no intention of doing, said Kliment.

Nonetheless, the rival churches do share the view that Patriarch Kirill can no longer rule Ukraine because of his support for the Russian invasion.

After Saturday worship, many, but not all, believers appeared to share his view.

“I support this decision because the Bible says ‘you shall not kill’,” said one man, Serhii.

Ludmila, 65, added she hoped that the priests would stop mentioning Kirill in prayers during services, which she said was “really awful and offensive”.

But another woman, Olena, 40, expressed concern about the schism. “I am afraid that it will weaken the Orthodox Church.”

She hoped Kyiv would not renounce Russian-language worship as “this old church language is very important in spiritual terms — it reconciles body and soul and has been giving people strength for centuries”.

Asked her view on Kirill, she paused, sighed and said: “It’s better to talk about who started the war.”