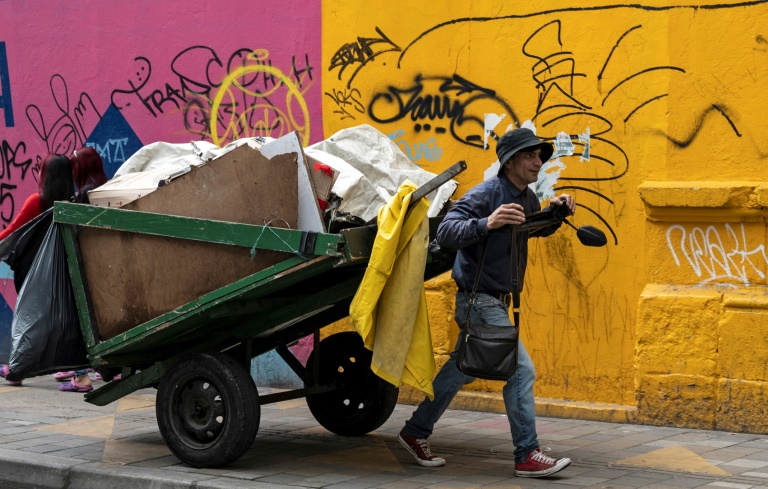 They appear at nightfall, dragging heavy carts from dustbin to dustbin in the affluent northern suburbs of the Colombian capital Bogota.

Informal recyclers, they rifle through the trash of the rich looking for waste plastic, glass bottles and cardboard they can sell for a handful of pesos.

It is back-breaking work for little reward, but a salvation for thousands in a country where one in eight city dwellers is unemployed, and the poverty rate approaches 40 percent.

“This life is hard, but it is my only option to survive,” Jesus Maria Perez, 52, told AFP.

Men, women and even children: these waste pickers are the face of the misery that candidate after candidate for Sunday’s first round of presidential elections has vowed to eradicate.

Many, Perez included, are among the estimated 1.8 million migrants to have fled neighboring Venezuela in search of a better life in Colombia — Latin America’s fourth-largest economy but one of the world’s most unequal.

In 2020, according to the Bogota city council, 25,000 of the capital’s eight million inhabitants worked as informal rubbish recyclers.

For Perez, who used to be a cook in Venezuela, it is a struggle to meet his daily goal of 40,000 pesos — about $10 — to cover his one meal a day, a bed for the night and parking for his wooden cart.

He has no horse or donkey to pull the heavy burden: the Bogota municipality banned the practice eight years ago to combat animal abuse.

And as few can afford a self-propelled vehicle, it is people who do the heavy lifting, pulling their carts for kilometers every day.

Whole families take part in the endeavor; the parents wading through the garbage as little ones wait in the cart, playing among the rubbish.

Bogota produces nearly 7,500 tons of waste every day, of which as much as 16 percent, municipal data shows, is recycled by people like Perez.

Nearly 80 percent of Colombian households did not recycle or even separate their waste at home, according to 2019 figures.

Martha Munoz, 45, runs a small recycling station where she buys waste from the informal collectors before reselling it to one of 15 large centers in Bogota.

“Many of those who come here live on the street; this allows them to have a small income,” she told AFP.

Munoz said she raised her seven children with her recycling income — one is a lawyer today and another an engineer.

On the day AFP met him, he had managed to earn only 25,000 pesos, just over half of what he needs.

Subtracting the rent for his room in a filthy boarding house in a rough neighborhood and expenses for parking his cart, Perez is left with just 1,000 pesos — about a quarter of a US dollar.

To make up the difference, he sets out again, this time to sell candy and bin bags on the street.

In this way, he collects enough to pay for his first and only meal of the day: a small sachet of rice with a bit of meat.

According to the World Bank, Colombia is one of the countries with the highest income inequality and biggest informal labor markets in Latin America.

Colombians go to the polls Sunday for elections in which deepening economic woes — which gave rise to deadly protests last year — are a key campaign issue.