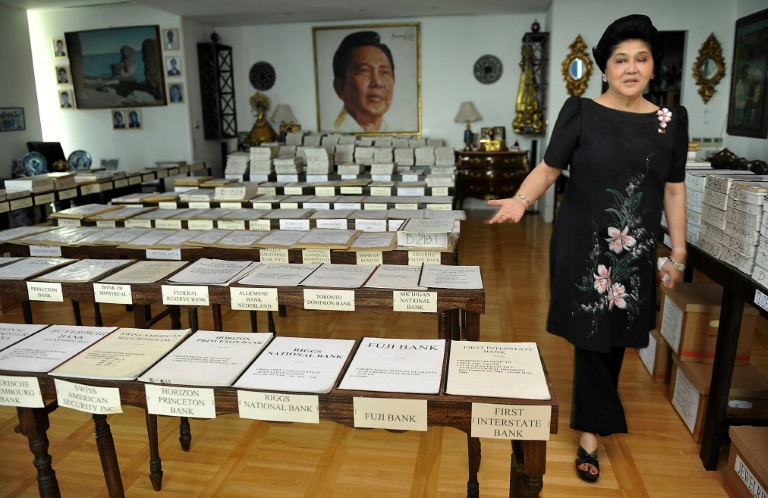 The Marcos clan has faced many court cases over the years, and former first lady Imelda has been the driving force in rehabilitating her family’s image – Copyright AFP Ted ALJIBE

Decades after fleeing the Philippines with bags and boxes stuffed with jewels, gold and cash, former first lady Imelda Marcos has achieved her ultimate ambition: her son winning the presidency.

The frail but flamboyant 92-year-old matriarch has been the driving force in the family’s comeback from exile to the peak of power in the May 9 polls.

President-elect Ferdinand “Bongbong” Marcos has described his mother as “the supreme politician in the family”, one who wields a “very big influence”.

Known for her lavish spending, Imelda symbolises the greed of her husband Ferdinand Marcos’s dictatorship, which ended in 1986 after a popular revolt ousted him.

An estimated $10 billion was stolen from state coffers over the course of his brutal and corrupt 20-year rule that left the country impoverished.

During that time, Imelda collected diamonds, art masterpieces and thousands of shoes, insisting her taste for luxury was meant to inspire her desperately poor countrymen and women.

“My role as first lady was… to set the standard, because mass follows class,” she told AFP in a 2009 interview from her penthouse apartment in one of Manila’s most expensive high-rises.

Bongbong’s victory marks the completion of her mission to reclaim the presidency and revive the family brand, analysts and observers said.

“I’m sure she’s feeling gratification,” said Andres Bautista, who once led a government agency tasked with tracking down the Marcoses’ ill-gotten wealth.

“What she wanted to happen was for Marcos Jr. to rehabilitate the Marcos name and reclaim the throne that Marcos Sr. occupied — and it’s happening.”

Tall, fair and glamorous, Imelda gained celebrity status in the Philippines and abroad as first lady, partying with stars and meeting Chinese leader Mao Zedong and Libya’s Moamer Kadhafi on behalf of her husband.

She inspired the derisive adjective “Imeldific” with her excess, which included importing African wildlife for a safari park in the archipelago.

Imelda has always denied wrongdoing, insisting her husband was rich before he became president.

While her detractors think the great-grandmother should be in jail, her legion of fans — many of them poor — still see her as a paragon of beauty.

In a senior citizens’ centre in Baseco, a hardscrabble port-side neighbourhood in Manila, Gloria Guarda’s face lights up as she recalls the time she met “Mam Imelda”.

“She’s so kind; I really think she’s beautiful,” said Guarda, 82, a life-long supporter of the Marcoses even though she says they owe her money.

A member of the Friends of Imelda Romualdez Marcos-24K loyalist group, Guarda said she and other volunteers were promised a million pesos ($19,000) each for taking part in a tree-planting programme more than a decade ago.

“I told myself, ‘I hope Bongbong will win so we can finally have money’,” she said.

Bongbong’s media team did not respond to AFP’s request for comment.

After her husband’s death in 1989, Imelda returned to the Philippines to face graft charges and resuscitate the family’s patronage networks.

Loquacious and eccentric — she has been known to lecture guests for hours about her philosophy on beauty and love — Imelda also has sharp political instincts.

“Imelda knew where to start rebuilding… and if you have the money to back you up it’s easier,” said Patricio Abinales, professor of Asian Studies at the University of Hawaii at Manoa.

She ran for president in 1992 and lost, but in the same elections Bongbong won a congressional seat representing their northern bailiwick Ilocos Norte.

Imelda, who later served three straight terms in the lower House of Representatives, was open about her desire for Bongbong to become president.

“I am practically pushing him to run for a higher office,” she told AFP in 2009 when asked if she wanted him to lead the nation.

He made a successful tilt for the Senate the following year, and then ran for vice president in 2016, with Imelda making appearances at campaign rallies. But he was narrowly defeated by Leni Robredo.

Deals with rival political dynasties and an online whitewashing of the family’s past fuelled his support and ultimate victory in the 2022 presidential race against Robredo.

Imelda, who gave up her seat in Congress in 2019, has long guided her children’s political careers.

Bongbong recently told CNN Philippines that “anything that happens in politics we always ask her ‘what do you think, is this a good idea, should we do it like this or should we wait?’”

Dozens of criminal and civil court cases have been launched against the Marcoses in the past 36 years, but they have beaten most of them.

In a rare legal setback, Imelda was sentenced to a lengthy prison term in 2018 for funnelling roughly $200 million in embezzled funds through Swiss foundations decades ago. She is on bail.

Photos showing Bongbong and his eldest son Sandro reportedly visiting Imelda after the May 9 election revealed a Picasso painting hanging on the wall.

It is not known if it is a copy or one of the 141 missing paintings government investigators are trying to track down.

But Abinales said Imelda’s message was clear: “Now I can flaunt my wealth again.”