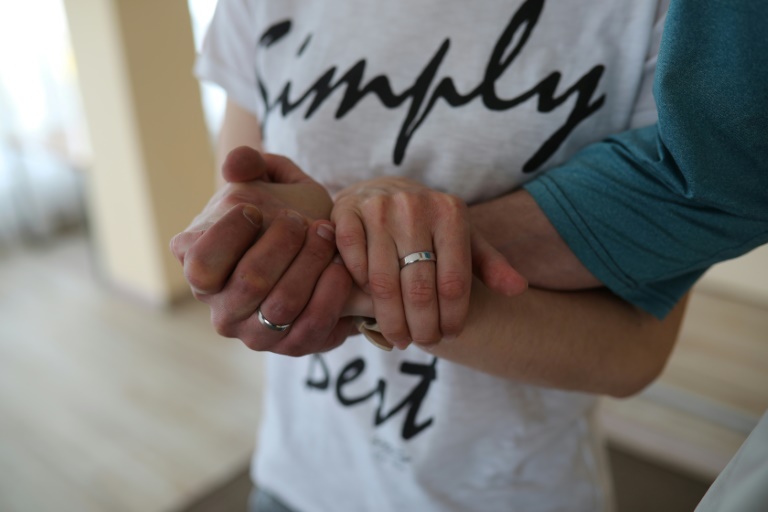 Ivan Khvatov, 39, and Olesya Khvatova, 41, wore jeans and trainers to Wednesday’s wedding ceremony, which was over in minutes – Copyright AFP/File Hector RETAMAL

As wedding season gets under way in Ukraine despite months of war, couples are faced with a difficult choice — celebrate their unions in style or stay discreet so as not to upset anyone.

At the wedding registry in Irpin, a town close to Kyiv that has been devastated by Russia’s invasion, Ivan Khvatov, 39, and Olesya Khvatova, 41, celebrated their nuptials in restrained fashion.

There were no guests or witnesses present, the couple wore jeans and trainers and Wednesday’s ceremony conducted by a registrar was over in minutes — just time for a kiss after signing the registry.

“We didn’t tell anyone about it,” the groom told AFP.

“First of all, a lot of people who evacuated at the start of the war have not come back… also people might tell us that now is not the time.

“Many people, including our friends, lost their homes. They might not understand,” Khvatov said.

“Despite the war, we want to keep on living. We feel full of joy but we’re trying to hide it.”

Irpin found itself on the front line in the weeks after Russia invaded on February 24 and lived under Russian occupation for a month.

Unlike in Kyiv, which has seen 3,800 weddings during the war, registry offices in the surrounding region shut down as Russian tanks advanced and many future brides fled across Europe. Men aged between 18 and 60 were eligible for military service and not allowed to leave.

In Irpin, the registry only re-opened on May 10.

“Morally it was hard after what the town went through,” said Liana Samoylenko, head of the Irpin department of registration of civil status acts, which deals with both weddings and death notices.

“Life is returning. And the weddings resuming bring back the hope that everything will be fine.

“These families that are being created will bring a new generation that will revive Ukraine,” she said.

Khvatov and Khvatova, who met at a glassware factory where they work, had been due to marry on March 17.

But, when the war began, Khvatova fled. She returned only when Russian troops withdrew and began focusing their attacks on the south and east of the country.

Mykhaylo Dewberry, 26, and his bride Anastasia, 20, also fled during the Russian occupation of the area.

But they decided to have a much larger celebration with over 40 loved ones present.

The newly-weds also decided to pose for wedding photos in front of some charred ruins in Bucha, a town close to Irpin that has become synonymous with the alleged war crimes carried out by Russian troops.

“There have been many tragedies in this place, and we wanted to show that there can also be renewal… That life has not stopped,” said Dewberry, the adopted son of US evangelists.

As the couple posed, she in a long white dress and veil, he in a bright blue suit, passing drivers honked their horns to congratulate them.

Dewberry and Anastasia met at a Christian camp two years ago and he asked her to marry him a year ago.

The invasion forced the couple to put their preparations on hold.

“When I came back, I cried. So many people lost their lives!” Dewberry said.

“But God has said that after the darkness, there is light.”