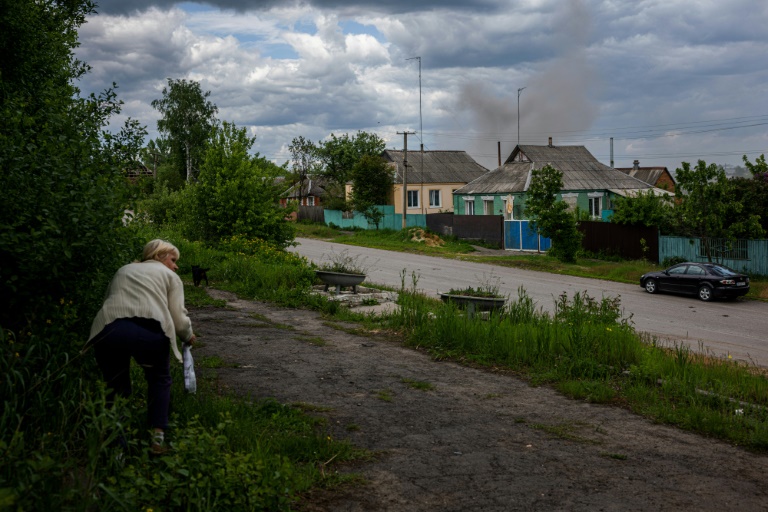 “This is how we live, running to our cellars. Maybe we should leave,” cries retired nurse Larysa Kosynets, heading for safety before Russian shells start slamming into her village near the eastern Ukraine city of Kharkiv.

As the 57-year-old rushes off to hide, a Ukrainian commander orders visiting journalists to leave the area as quickly as possible.

The reporters have been escorted by the Ukrainian army on condition they do not identify the village.

Before the Russian shelling started, the Ukrainians were firing on Russian positions in an artillery battle that has lasted days on the outskirts of Kharkiv, Ukraine’s second city.

Although the Russians pulled back from Kharkiv to redirect troops to Ukraine’s eastern Donbas region and the south, they have kept their positions to the east, maintaining a constant barrage of fire towards the city and nearby villages to hold back the Ukrainian counteroffensive.

In this rural village, evidence of the fighting is everywhere with many houses destroyed, others missing walls or with the roof caved in. The ground is pockmarked with craters.

The village, largely dedicated to livestock farming, had around 1,000 residents before the war. Today only around 100 remain.

“The people who stayed have animals. They can’t leave them. They’ll die if nobody gives them food or water. Those who only had chickens left,” Kosynets explains.

“The village is our land, our home. How can we just leave? We have our roots here,” she adds.

Kosynets and the other residents who have stayed spent two months under Russian occupation before Ukrainian troops took back control of the village about two weeks ago.

When the Russians were there, life was very difficult, she says.

“It was forbidden to go to Kharkiv. There was a shortage of everything, there were only potatoes and some tinned food. After a while, the Russians let us go to Volchansk,” a town northeast of Kharkiv.

With no water or electricity and no working phone network, the villagers were only allowed to go up a nearby hill once a day to get a mobile signal so they could contact their relatives.

Kosynets says it was troops from Donetsk, a city which since 2014 has been run by pro-Russian separatists, who allowed them that one liberty, saying they were more flexible with the villagers than the Russians.

But going up the hill quickly became dangerous because other soldiers would “shoot over their heads to scare them”.

Russia’s rationale of a “special military operation” to demilitarise and de-Nazify Ukraine draws a snort of derision.

“Show me one Nazi in the village! We have our nation, we are nationalists but not Nazis nor fascists,” she says, demanding that Russian President Vladimir Putin “withdraw his troops”.

Living alongside Ukrainian soldiers has really helped, she says.

“They share everything. Cigarettes, food… We have become a family.”

Nearby her husband Vitaliy Kuzmenko, 42, is raking up freshly cut grass to feed to their cow and goats.

“We’re surviving — what else can we do?” he shrugs, totally fed up with the ongoing artillery fire.

He says he has learned to distinguish between the sound of “an incoming shell from an outgoing one”.

“When the strikes are nearby, we hide. I reinforced my basement with concrete and iron and I equipped it well, I built a stove,” Kuzmenko says.

“We sleep in the house with our clothes on and if there is shelling we go to the basement.”

“It’s my land, I don’t want to leave,” he says, despite the doors and windows of his home having been blown out by shelling, and his fields damaged.

“We were lucky, thank God.”