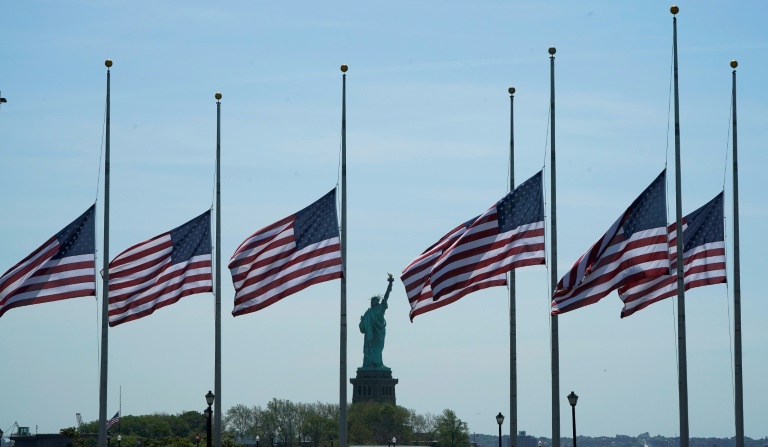 The world voiced revulsion Wednesday at the massacre of Texas schoolchildren, which for some raised new questions on whether the United States can effectively promote itself as a global model.

President Joe Biden, who has made championing democracy a key priority, appeared conscious of the damage to the US reputation in an impassioned plea for action late Tuesday moments after returning from Asia.

“What struck me on that 17-hour flight, what struck me, was these kinds of mass shootings rarely happen anywhere else in the world,” said Biden, who had mourned victims of another mass shooting in Buffalo on the eve of his trip.

US allies as well as UN Secretary-General Antonio Guterres, who rarely weigh in on US domestic affairs, all voiced horror over a teenage gunman’s killing of 19 children and two teachers in Uvalde, Texas.

Ukrainian President Volodymyr Zelensky — who has been relying on US weapons to repel a Russian invasion — called such peacetime deaths “terrible,” while French President Emmanuel Macron said he shared “the rage of those who are fighting to end the violence.”

Some allies questioned, politely, why the United States — with its constitutional right to bear arms and powerful gun lobby — cannot tackle gun violence, which claims on average 111 lives a day.

New Zealand’s Prime Minister Jacinda Adern, who was visiting the United States, pointed to how her government tightened gun laws after a white supremacist killed 51 people at two mosques in Christchurch in 2019.

“We are a very pragmatic people. When we saw something like that happen, everyone said, ‘Never again,’” she told the CBS “Late Show.”

In Australia, which quickly banned semi-automatic weapons after a mass shooting in 1996, a minister in the new left-leaning government mourned “another senseless act of gun violence in the United States.”

“It is hard to imagine that a great country like the United States can go on like this, with this gun violence, these mass atrocities,” Treasurer Jim Chalmers told reporters.

Like during other recent episodes in the United States, including the attack on the US Capitol by supporters of Donald Trump and the police killing of George Floyd, US adversaries went on the offensive.

China — which faces constant US criticism on human rights, including over what Washington considers “genocide” against the Uyghur minority — said it was “unacceptable” that the United States has not addressed gun violence or racial discrimination.

“How can one expect the US government, (which) doesn’t even care about the human rights of its people, to genuinely concern itself with the human rights situation in other countries?” foreign ministry spokesman Wang Wenbin said.

The Global Times, a nationalist state-controlled newspaper, said the Texas shooting exposed the “failure” of the United States which is “the most dangerous place in the world.”

The United States has long faced accusations of double standards in boasting of its democracy.

During the Cold War, the Soviet Union pointed to Jim Crow systemic racism and, more recently, allies have voiced revulsion that the United States is the last Western nation to practice capital punishment.

Jeremi Suri, a professor of history and public affairs at the University of Texas at Austin, said it was commonplace for authoritarians to say they keep citizens safe, pointing to arguments presented by Russian President Vladimir Putin.

But he said the level of gun violence made it increasingly difficult to dismiss the issue as just “one of the oddities of American society, that we’re cowboys and carry guns.”

“The inability to manage basic safety for citizens contributes to an image that we are, unfortunately, seeing more and more evidence of, of people in foreign societies who believe that democracy is a dysfunctional form of government,” he said.

“Even though we’ve always fallen short at home, democracy nonetheless is an important part of our international brand, and this definitely diminishes that.”

Gerard Araud, the outspoken former French ambassador to the United States, on Twitter described gun violence as a “craziness without any prospect of improvement.”

“Nothing. Nothing will happen. There will be more massacres,” he wrote.