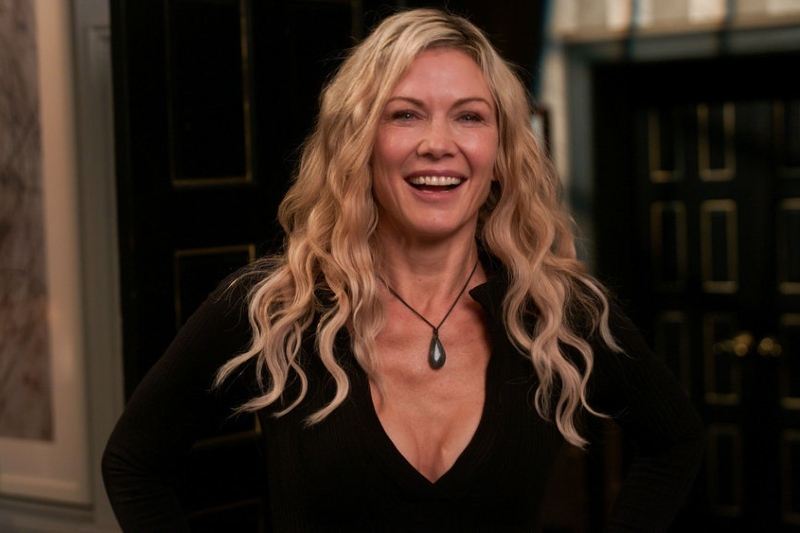 Acclaimed actress Stacy Haiduk chatted about her 2022 Daytime Emmy nomination for her acting work in “Days of Our Lives.”

‘Days of Our Lives’

She is known for playing the dual roles of Kristen DiMera and Susan Banks on the hit NBC soap opera. “The thing I like most about them is that both of them are very opposite,” she said. “I enjoy playing both of them, and they both balance each other out. Kristen is more grounded and earthy while Susan is more flighty and airy. Both are exciting for me to play, and they do balance each other out, and I find that really refreshing.”

“Each one has their own passion they are going after. I love Kristen because she’s strong-willed, and Susan is strong-willed and dominant too. They are both people that I love and I love playing both of them. They are strong women and they go after what they want,” she added.

When asked how she handles being dialogue-heavy, she said, “It’s a lot for me, but I do enjoy it. I am just happy to be working. It’s a challenge sometimes for me, but it is definitely good as I age.”

Haiduk is nominated for the 2022 Emmy for “Outstanding Supporting Actress in a Drama Series” for “Days of Our Lives.” “That was very exciting,” she said. “It is wonderful to have your peers watch your work, and then you get nominated, and it’s exciting.”

“This year, I submitted my scenes as Kristen DiMera. I had some great scenes with Eric Martsolf. We had long interrogation scenes so that was enough material to just put that in there,” she added.

On the greatest lesson that the acting profession has ever taught her, she responded, “To be present.”

She opened up about being a part of the new movie “No More Goodbyes,” where she plays the judge, which was written by Rebekah Ganiere and directed by James Ganiere. “I loved it. We filmed that during the shutdown. That was my first project back and I was really happy to get it,” she said.

“I really enjoyed it. I never played a judge before, I had a blast,” she added.

Most recently, Haiduk was a part of the “Samantha’s Friends” benefit fundraiser for the Southeastern Guide Dogs, which was held in Lakewood Ranch in Florida. “It’s a nice gathering, isn’t it?” she said. “It’s always a pleasure to do that, I really love it. Samantha and Alice are dear people and they put on a good charity, it’s a good one. I feel blessed to be a part of it.”

This past March, she enjoyed being a part of Spectrum Celebrity Events‘ in-person Septennial Dinner fan event in Burbank, California. A portion of the proceeds of their events helps True Colors United. “That was great too. I love those guys,” she exclaimed.

She had great words about visiting Santorini, Greece. “That was amazing. Oh my gosh, it was so beautiful there, I didn’t want to come back home,” she said.

If she were to have any superpower, she revealed that it would be “the power to heal.”

On the title of the current chapter of her life, she said with a sweet laugh, “Where Am I Now?”

The best advice she was ever given in this industry is “not to take it too seriously.”

Haiduk defined the word success as “being present, living life, and enjoying it.”

To learn more about actress Stacy Haiduk, check out her IMDb page, and follow her on Instagram.